Sharon is taking Thriller Thursday back! LOL! This week I am happy to share my thoughts on Flora Collins’ debut novel, Nanny Dearest and Kevin O’Brien’s new book, The Night She Disappeared (not to be confused with Lisa Jewell’s novel by the same name) 🙂 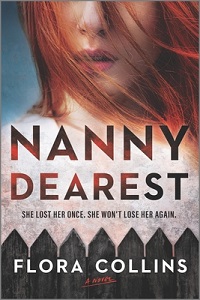 When I read the synopsis for Flora Collins’ debut novel Nanny Dearest, I was immediately intrigued. I am always in the mood for a good psychological thriller with flawed yet sympathetic characters and Nanny Dearest did not disappoint.

For the last year Sue Keller has been pretty much a recluse. Her father died in an accident a year before and it just broke her. He was all she had in her life, as her mother died when she was four years old. While on a rare day out, Sue runs into Anneliese (Annie), who was her nanny twenty years ago. Still grieving for her father and craving a motherly connection, Sue is happy to have Annie back in her life and the two become inseparable. But as Annie’s behavior starts to become smothering and as Sue starts to uncover the truth from the time Annie was her nanny, Sue realizes there is something very wrong with Annie.

This story alternates between Sue’s POV in the present and Annie’s POV in 1996 when she was Sue’s nanny. I loved having the book unfold this way. Seeing Annie’s behavior towards Sue in the present and then getting a look at her behavior when she was Sue’s nanny just added a lot of suspense to the book. It is clear from both timelines that Annie has some mental health issues. And while Annie came across as a whack-a-doodle in both timelines, the more we got on her backstory, the more I could understand why she had such a fascination with Sue and the more sympathy I had for her. Annie’s POV/timeline was my favorite part of the book. I loved getting all of the backstory and what life was like for them all back then.

I had a lot of sympathy for Sue as well. She doesn’t remember her mother very much and was devastated when her father died. When she meets up again with Annie, she so much wants to hear stories from when she was a child and about her mother. My favorite part of Sue though was when we got to see her as a child during Annie’s timeline. Sue was such a cute child, and it just broke my heart when her mother died, and she didn’t understand what was going on.

Nanny Dearest is a slow burn psychological thriller. I had no idea where this book was going to go and the not knowing added the suspense, tension, and creepiness to the read. By the end of this book I was flying through the pages to see how it was going to end. And what an ending it was! When I finished the last page, I literally sat there trying to comprehend what I just read. I am still not sure how I feel about the ending. LOL!  3 1/2 stars

Warning: There is a part in the book that has abuse to a cat. I will say I skimmed/jumped over that part of the book. 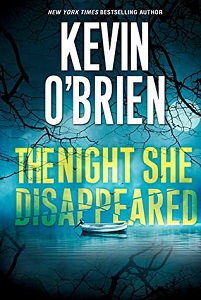 The Night She Disappeared Goodreads

I have had Kevin O’Brien’s The Night She Disappeared on my to read shelf for almost a year. I am trying to tackle some of my older books, rather than leave them sitting there in favor of new releases (lol) and finally picked this one up to read. And I am glad I finally did. This was a twisty mystery that kept me guessing until the end.

Anna Malone is a TV reporter for a local station in Seattle. She is dating Russ Knoll, a married pediatrician. Russ’ wife Courtney is a best-selling author who Anna has just done a story on to promote her newest book.  When the book opens, Anna has woken up with a terrible hangover. All she can remember from the night before is meeting Russ and Courtney at an elegant restaurant to celebrate the story that Anna has done on Courtney. She does not remember how she got into her bed at home. When she gets a call from Russ saying that Courtney is missing, Anna cannot shake the feeling that something terrible happened the night before.  As the days go by and Courtney has not been found, Russ becomes the prime suspect in the police investigation. Anna is also thrust into the spotlight and the investigation when it is revealed by her TV rival, Sally Justice who has a show called “The Sally Justice Show”, that Anna and Russ were having an affair. Anna has also been getting phone calls from an unknown number and the caller says that they know what happened that night and that Anna murdered Courtney. What happened to Courtney? Can Anna piece together the events of that night and prove she is not a murderer?

I liked Anna. She is a flawed character (Hello! She is having an affair with a married man. LOL), but she was also a sympathetic character. Her older brother Stu ran away when Anna was a teenager, the following year her father was arrested for insider-trading and killed himself in jail, and when Anna was a junior in college, her mother died in a car accident. She is all alone trying to figure out what actually happened the night Courtney went missing. With the help of Sally Justice’s daughter, Taylor, Anna has sessions with a psychotherapist, who through hypnosis is helping Anna remember. I don’t want to say what came from these sessions, but I will say right from the get-go I did not trust the therapist or even Taylor.

Anna lived on a floating house on Lake Union, and I love how having the majority of the book take place there really gave this book a creepier atmosphere, especially at night when Anna is in her house and outside is just black and anyone could have been out there on the water watching her.

There is so much I cannot say about this book because I don’t want to give anything away. I loved all the twists and turns as the story unfolded. Near the end I did figure a few things out and while I am not 100% on board with the who-dun-it and why, I really enjoyed the journey to finding all the answers. 3 ½ stars