Hi Everyone! It’s Sharon, back with another edition of Thriller Thursday. This week I am sharing my thoughts on Stephen King’s new book, Billy Summers. I know I normally have two reviews to share, but I loved this book so much and I had so much to say about it, that I didn’t think it would be fair to another author to only give a short blurb for their book. But don’t worry, next Thriller Thursday I will be back to two reviews. I even know which books they will be and I am almost finished with the first one. 🙂 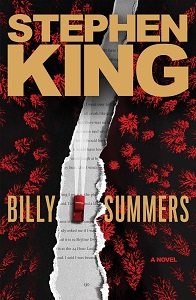 Stephen King’s latest book Billy Summers is now in my top ten favorite King books. This was not a scary read. It’s more of a crime/suspenseful mystery. As always with Stephen King’s books, I was fully invested in the characters and cared about them so much. I had butterflies in my stomach almost the entire time I was reading because I had no idea where this book was going and was afraid for their safety with every turn of the page.

The book centers around Billy Summers, who is an Iraq war vet whose specialty is being one of the best snipers in the world. When Billy leaves the Marines, he puts that specialty to use and becomes a killer for hire. But Billy will only kill men who he deems are bad. So yeah, he is a killer with scruples. Billy is ready to retire but has decided to do one last job, for two million dollars. He does this job and he is set for life. What could possibly go wrong? Everything, that’s what.

I fell in love with Billy from the very beginning. Yes, he is a killer, but beneath all that there is a very nice and caring man. And we get to see this man while Billy is waiting for his mark to arrive. The man Billy has been hired to kill is currently in L.A. fighting extradition to be returned to a southern town called Riverdale to face murder charges. While waiting, Billy has been set up with a false identity and cover story. He is a writer that is working on a novel. He is living in a house in a family neighborhood and it is here that we get to see the man Billy really is as he gets to know and become friends with his neighbors. I really enjoyed watching him interact with his neighbors. They would go to each other’s house for dinners, and he would play with their children. He was just an all-around great guy (I know, I know he is a killer for hire lol).  When it got closer to the time the kill would take place, Billy started to feel bad at how upset his neighbors, especially the children, would be when they learned who he really was.

I don’t want to say what went wrong with the hit, but I will say that all does not go as planned and Billy has to go into hiding. It is while he is in hiding that we meet another great character, Alice. Alice was the victim of a rape and she was left on the side of the road across the street from the apartment that Billy was hiding out in.  When Billy saw a van drive down the street and dump her out, he assumed she was dead but when he went out to check and found that she was alive he brought her back to the apartment. See he is really a nice guy. I really liked Alice, she was one tough and smart cookie. She joins Billy on his trip across the country to right the wrongs that were done against him. I loved watching the relationship between Billy and Alice grow. It wasn’t instant trust between the two of them, which made it feel all the more realistic. Billy and Alice brought out the best in each other.

While Billy was waiting for the hit to occur, he actually did do some writing and then continued with the writing after, and it is through his writing that we learn more about him. When Billy was 11 years old his stepfather killed his little sister and then came after Billy, but Billy shot and killed him. After spending a few years in a foster home Billy joined the Marines. We get a good look as to what it was like to be on the ground in Iraq through Billy’s writings. The writing of being in Iraq was so authentic that I could visualize everything. I really liked having the chapters of the actual story broken up with pages from Billy’s writing. As much as I loved Billy from the beginning of the book, reading the words he wrote about his life made him all the more loveable and also sympathetic.

This book was a slow but steady build up to a tension filled ending that had me in tears. If you are a fan of Stephen King I think you will enjoy Billy Summers. If you have been looking for a Stephen King book to read, but don’t want the pants scared off you (lol), I recommend Billy Summers.  4 ½ stars