Welcome back to Sharon’s edition of Thriller Thursday! This week I am reviewing Hannah Mary McKinnon’s, Never Coming Home and Linwood Barclay’s, Take Your Breath Away.  I really enjoyed both of these books and they both had similar themes; husbands that are at the center of their wives disappearance/murder. LOL! 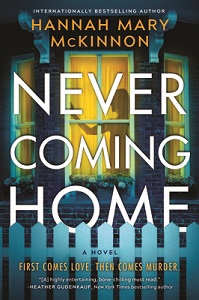 I have enjoyed every book I have read by Hannah Mary McKinnon and Never Coming Home is no exception. Lucas Forester didn’t really hate his wife, Michelle. She was beautiful, sophisticated, and very rich. It is because she is rich that Lucas married her. He had originally planned on divorcing her after a couple of years to get his millions, but thanks to his father-in-law and an airtight pre-nup, Lucas had to adjust his plans to get his hands on her money. For years Lucas planned Michelle’s death. He hired a hit man to kidnap and kill Michelle, and he made sure he left no trace that would lead police to him.  Lucas has been playing the grieving husband for a month and patiently waiting to be able to cash-in on Michelle’s fortune. But when shocking photos of Michelle start showing up, with notes stating, “I know what you did,” Lucas starts to unravel. How could anyone know what he did? Lucas is determined to find out who is behind the photos and notes and shut them up for good.

McKinnon did a great job of creating a villain that I hated, but also liked and had sympathy for at times.  Lucas was a great character. Yes, I know he put a hit out on his wife, but he also had me chuckling a few times and he was very devoted to his mother in-law, who has terminal cancer and does not have long to live. He was always going over and sitting with her and you could tell his feelings for her were genuine. He also loved his father, and it is because of his father he is doing all this. His father had a stroke years ago, which Lucas blames himself for, and he needs the money to be able to keep his father in the best care facility. And he rescued and adopted a stray dog. See, he is a good guy, well except for the killing his wife part. LOL!

The book was told from Lucas’ POV, and I really loved getting inside his head and learning all about him and what made him do what he did. I especially loved watching him unravel as the photos and notes started arriving. He went from this cool, collected, and calculated guy, to a nervous, always looking over his shoulder guy, who was starting to make many mistakes. It was really fun to watch.

I did figure a few things out early on who was behind everything, but I still enjoyed the ride while Lucas was trying to piece it all together.  The last chapter had me cringing, and I kind of felt bad for Lucas.  If you are looking for a psychological thriller that features a somewhat likable villain, then check out Hannah Mary McKinnon’s Never Coming Home.   3 ½ stars 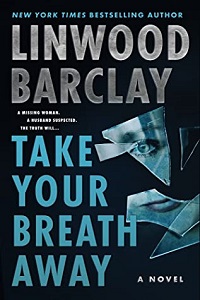 Take Your Breath Away Goodreads

Take Your Breath Away is my second read by Linwood Barclay and while it did not knock my socks off like Find You First, I did enjoy it very much.

Andrew Mason’s wife, Brie, went missing six years ago while he was away on a fishing trip. Most everyone assumed he got away with murder but try as they might, the police could not build a case solid enough to arrest him. Andrew eventually sold his house, moved a couple of towns over and changed his last name. He has finally gotten his life back together and lives with his new girlfriend, Jayne, and her teenage brother, Tyler. Now six years after Brie went missing, a woman who looks just like her shows up at their old house, which has been torn down and rebuilt, screaming “Where’s my house? What’s happened to my house?” As quickly as she appeared, she disappeared again. The appearance of this woman has a ripple effect that puts a lot of people’s lives in danger.  Who is this woman? If she is Brie, where has she been for six years? And if not, why is someone pretending to be her? And what did happen to Brie?

I really liked Andrew. Andrew’s life spiraled out of control after Brie disappeared, and it didn’t help that his sister-in-law, Isabel, was doing everything she could to make his life miserable. She was sure he was responsible and made it her mission to get the police to take action. I can totally relate to her on that aspect. If that had been my sister and I thought my brother-in-law was to blame, I would stop at nothing to make him pay. Now with the “Brie” sighting, Andrew’s life could come crashing down again and he is determined to figure out what is going on.

Detective Melissa Hardy was the original investigator on the case and she too made Andrew’s life hell. She had such tunnel vision that he was responsible for whatever happened to Brie, that she would not let up. And then when the mysterious woman appeared, Detective Hardy was back on Andrew’s case. I have to say I did not like her much. I thought she was too aggressive in her approach to things. She didn’t follow the true facts; she followed what she wanted to be facts.

Most of the characters in this book had secrets to hide, though some secrets were worse than others. And that just added to the mystery of who this mysterious woman was and what happened to Brie.

There is so much I cannot say about this book because I don’t want to spoil anything. There are so many twists and turns and I had no idea what the outcome was going to be. I was very surprised when everything was revealed at the end.  3 1/2 stars

Thriller Thursday Reviews: The Woman on the Bridge & Unforgivable

Thriller Thursday Reviews: A Slow Fire Burning & Where I Left Her
9 replies

Reviews: THE DEAD ROMANTICS & HERE FOR THE DRAMA
Scroll to top