This week’s TTT topic is Most Anticipated Releases of the Second Half of 2021.  This is always an easy topic just because, of course, there are always so many books that I’m excited to get my hands on.  I don’t have ARCs for most of these so I’ll be waiting to read them when they’re actually out in the world, but I fully expect several of these to make my best of 2021 list. 🙂

My Most Anticipated Releases of the Second Half of 2021

1. HEARD IT IN A LOVE SONG by Tracey Garvis Graves  –  “From the bestselling author of The Girl He Used to Know comes a love song of a story about starting over and second chances.”

2.  ISN’T IT BROMANTIC? by Lyssa Kay Adams – I adore this series and I’m so excited that we’re finally getting a book with the Russian, who is my favorite character from the series.

3.  THE LOVE HYPOTHESIS by Ali Hazelwood – “When a fake relationship between scientists meets the irresistible force of attraction, it throws one woman’s carefully calculated theories on love into chaos.”

4.  THE BOOK OF MAGIC by Alice Hoffman – Alice Hoffman is one of my favorite authors so her books will always make my most anticipated lists, especially if it’s a new book in my favorites series. 🙂

5. THE HEART PRINCIPLE by Helen Hoang – This is another favorite series of mine and this time around we’re getting a book about Quan, who is a favorite character from earlier books.

6. ONCE UPON A BROKEN HEART by Stephanie Garber – This is obviously a trend with my list but here is yet another new book that features a beloved character from a previous series, this time it’s Jacks from Caraval.

7.  WAIT FOR IT by Jenn McKinlay – “A woman looking for a new lease on life moves to Arizona where she rents a guest house on a gorgeous property with a mysterious owner–a man who teaches her about resilience, courage, and ultimately true love, in this funny, bighearted novel about hope and healing from New York Times bestselling author Jenn McKinlay.”

8.  THE EX HEX by Erin Sterling – “New York Times bestselling author Rachel Hawkins, writing as Erin Sterling, casts a spell with a spine-tingling romance full of wishes, witches, and hexes gone wrong.”  I read somewhere that this is like Hocus Pocus but with sex, which sounds pretty irresistible to me.

9.  FERAL CREATURES by Kira Jane Buxton – “In this stunning follow-up to Hollow Kingdom, the animal kingdom’s “favorite apocalyptic hero”is back with a renewed sense of hope for humanity, ready to take on a world ravaged by a viral pandemic.” Hollow Kingdom turned out to be such a gem of a book that I can’t wait to revisit this world and see what S.T. is up to.

10. SURVIVE THE NIGHT by Riley Sager – “It’s November 1991. George H. W. Bush is in the White House, Nirvana’s in the tape deck, and movie-obsessed college student Charlie Jordan is in a car with a man who might be a serial killer…” I’ve had really good luck with Sager’s thrillers so far, so I’m pretty excited to get my hands on a copy of his latest. 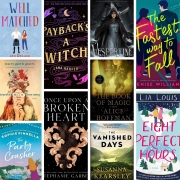 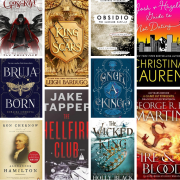 Romance Reviews: TO SIR, WITH LOVE & ONCE UPON A ROYAL SUMMER