This week’s TTT topic is Books I Enjoyed but Have Never Reviewed On My Blog.  There was a time when I reviewed everything I read but the past couple of years I’ve mainly focused on reviewing the ARCS I receive.  That means there are quite a few books that I read but never talk about on the blog.  For this week’s topic I’ve decided to share the 10 most recent books I’ve read but not reviewed even though I enjoyed them immensely.

Books I Enjoyed but Have Never Reviewed On My Blog

1. ALL YOUR PERFECTS by Colleen Hoover

After loving Regretting You, my first Colleen Hoover read, I decided I need to read everything Hoover has written.  All Your Perfects is the most recent book I’ve tackled, and no surprise here if you’re a CoHo fan, but this book wrecked me.  It’s about how a couple’s struggles with fertility push their marriage to the brink of disaster. The way Hoover presents the story, through alternating past vs. present chapters that show their ups and downs as a couple, makes for a read that is truly an emotional roller coaster.

2.  BRITT-MARIE WAS HERE by Fredrick Backman

Backman’s books are hard to describe in such a way that truly captures their magic.  He creates such quirky and unforgettable characters and you really just have to meet them for yourself to really appreciate them. I loved getting to know Britt-Marie, who has walked out on her cheating husband and is now trying to find her place in the world.

3.  IT ENDS WITH US by Colleen Hoover

Colleen Hoover strikes again.  This one is a heart-wrenching read about abuse and the toll it takes on families and relationships. The story is beautifully written and this tough topic is handled realistically and delicately. While there are numerous moments throughout the story that made me smile, by and large, I was filled with sadness and even anger as I read about everything the main character Lily witnessed as a child and then lived through herself as she grew older. This is definitely one of those books that is going to stick with me.

4.  THE FLOAT PLAN by Trish Doller

Don’t let that sunny book cover fool you. This is a story about loss, grief, and finding your path forward after losing the love of your life. It’s a grief book but also one filled with hope that just moved me from start to finish. It also made me want to learn how to sail, lol.

5. FLY AWAY by Kristin Hannah

This is one of those heartbreaking yet hopeful reads. It’s about a mother and daughter who have been estranged for years but finally, because of an immense tragedy, have a shot at redemption and reconciliation.

I had put off starting this series even though it sounded amazing just because there has been so much hype surrounding it.  I finally read it in February and wow, it really lives up to the hype.  It’s a Chinese-inspired historical military fantasy that is filled with treachery and magic.  I fell in love with Rin, the main character, a young dark-skinned peasant girl who defies the odds and secures herself a place to study at the Sinegard, the most elite military school in her land.  Once she begins her studies, she realizes she possesses a rare and potential lethal power – an aptitude for Shamanism.  She must master this power because it may be the only thing that can save her people from the war that is looming.

7.  MAYBE IN ANOTHER LIFE by Taylor Jenkins Reid

Taylor Jenkins Reid is another author that I’m working my way through her backlist.  Last month I read this book and thought it was really good.  It’s a story that using a multiverse, “what if” type of scenario, explores the idea that everything that happens is for a reason.  The main character Hannah, who has just moved back to her hometown, is presented with two choices – 1) go home from the bar with her high school boyfriend Ethan for what will most likely be a one night stand or 2) go home without him. If they are meant to rekindle their relationship it will happen in its own time.  From the moment those two choices are presented, the book proceeds to follow Hannah, showing us how each choice would play out.  It’s not my favorite TJR read but it’s definitely a great read.

It’s hard to talk about this book without spoiling it so I’ll just say if you’re interested in a twisty, atmospheric domestic thriller, this would be a great choice.

At around 800 pages, this is a brick of a book but it is a fascinating and thought-provoking read. I was hesitant to read it because it’s basically an apocalyptic story about a  fungus plague that is gradually wiping out the world’s population and a group of sleepwalkers who are making their way across the country.  It’s unclear what is going on with the sleepwalkers so you’re basically along for the ride, waiting to see where they’re going, what they’ll do once they reach their destination, and how any of this is related to the deadly plague.  Since we’ve been dealing with a pandemic, I didn’t know if I could handle such a dark read, but once I got started, it was just too riveting a read to put down.  It’s got a little something for everyone – politics, religion, you name it.  Be forewarned though that it does contain some pretty graphic violence.  Made me queasy a few times, lol.

10. ONCE UPON A WARDROBE by Patti Callahan

I just finished this book on Sunday and what a gem of a story this is.  It follows Megs, a young woman who, at the request of her dying 8-year-old brother George, seeks out C.S. Lewis, the author of The Lion, the Witch, and the Wardrobe.  George wants her to ask Mr. Lewis where Narnia came from, and even though she has no real interest in the answer herself, she loves her brother and can’t refuse him this request.  Instead of giving her the answer plainly, however, Mr. Lewis reveals the answer through a series of stories that she brings home and shares with George.  The stories he tells and the truths they reveal end up having just as much of an impact on Megs as they do on George.  I can’t even begin to explain this very well but it’s a must-read if you loved Narnia as a child or still do even now. 🙂 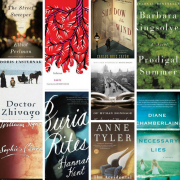 Top Ten Tuesday: Books That Have Been On My TBR the Longest and I Still Haven’t Read

Top Ten Tuesday – Birds of a Feather: My Favorite Books with Birds on the Cover 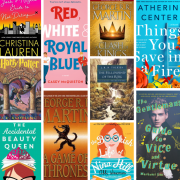