This week’s TTT topic is Bookish Characters.  I love books about books and bookish characters so I’ve already shared lists of my favorites over the years.  This time around, so as not to duplicate, I decided to share some more recent bookish characters I’ve come across in my readings.  There are definitely a few new favorites in these books. 🙂

1. ISABELLE from BY THE BOOK by Jasmine Guillory

The story is a contemporary retelling of Beauty and the Beast, and the Belle character works in the publishing industry and is tasked with helping the Beast character write his memoir.

An enemies to lovers romance that features a take-no-prisoners literary agent and the guy she thinks is her nemesis, a handsome broody book editor.

3.  CUSSY CARTER from THE BOOK WOMAN OF TROUBLESOME CREEK by Kim Michele Richardson

Cussy Carter is a lonely young Appalachian woman who joins the historical Pack Horse Library Project of Kentucky and becomes a librarian, riding across slippery creek beds and up treacherous mountains on her faithful mule to deliver books and other reading material to the impoverished hill people of Eastern Kentucky. She befriends fellow Kentuckians and is fiercely determined to bring comfort and joy, instill literacy, and give to those who have nothing, a bookly respite, a fleeting retreat to faraway lands.

4.  LANIE BLOOM from BY ANY OTHER NAME by Lauren Kate

Lanie Bloom became a romance book editor because she was inspired by her favorite romance author, Noa Calloway. When a once in a lifetime opportunity comes along for her to work directly with Noa, Lanie is in for an unexpected surprise that turns everything she thought she knew upside down.

5. JUNE JONES from THE LAST CHANCE LIBRARY by Freya Sampson

Librarian June Jones has never left the sleepy English village where she grew up. Shy and reclusive, the thirty-year-old would rather spend her time buried in books than venture out into the world. But when her library is threatened with closure, June is forced to emerge from behind the shelves to save the heart of her community and the place that holds the dearest memories of her mother.

6. NORA HUGHES from MUST LOVE BOOKS by Shauna Robinson

When Nora landed an editorial assistant position at Parsons Press, it was her first step towards The Dream Job. Because, honestly, is there anything dreamier than making books for a living? But after five years of lunch orders, finicky authors, and per my last emails, Nora has come to one grand conclusion: Dream Jobs do not exist.

With her life spiraling and the Parsons staff sinking, Nora gets hit with even worse news. Parsons is cutting her already unlivable salary. Unable to afford her rent and without even the novels she once loved as a comfort, Nora decides to moonlight for a rival publisher to make ends meet…and maybe poach some Parsons’ authors along the way.

But when Andrew Santos, a bestselling Parsons author no one can afford to lose is thrown into the mix, Nora has to decide where her loyalties lie. Her new Dream Job, ever-optimistic Andrew, or…herself and her future.

7.  ODILE SOUCHET from THE PARIS LIBRARY by Janet Skeslien Charles

It’s 1939 and young and ambitious Odile Souchet has her dream job working at the American Library in Paris. When the Nazis march into Paris, Odile stands to lose everything she holds dear, including her beloved library. Together with her fellow librarians, Odile joins the Resistance with the best weapons she has: books. But when the war finally ends, instead of freedom, Odile tastes the bitter sting of unspeakable betrayal.

This story follows a pair of cowriters, Katrina and Nathan, who, after penning a best-selling novel together, had a major falling out and haven’t spoken to each other in three years. There’s major tension when they have to reuinite to write one more book to fulfill their contract.

9. KARA SULLIVAN from TALK BOOKISH TO ME by Kate Bromley

Kara Sullivan’s life is full of love—albeit fictional. As a bestselling romance novelist and influential bookstagrammer, she’s fine with getting her happily-ever-after fix between the covers of a book.

But right now? Not only is Kara’s best friend getting married next week—which means big wedding stress—but the deadline for her next novel is looming, and she hasn’t written a single word. The last thing she needs is for her infuriating first love, Ryan Thompson, to suddenly appear in the wedding party. But Ryan’s unexpected arrival sparks a creative awakening in Kara that inspires the steamy historical romance she desperately needs to deliver.

10. MARY PORTER-MALCOLM from BY THE BOOK by Amanda Sellet

As a devotee of classic novels, Mary Porter-Malcolm knows all about Mistakes That Have Been Made, especially by impressionable young women. So when a girl at her new high school nearly succumbs to the wiles of a notorious cad, Mary starts compiling the Scoundrel Survival Guide, a rundown of literary types to be avoided at all costs.

Unfortunately, Mary is better at dishing out advice than taking it—and the number one bad boy on her list is terribly debonair. As her best intentions go up in flames, Mary discovers life doesn’t follow the same rules as fiction. If she wants a happy ending IRL, she’ll have to write it herself.

Question:  Are you familiar with any of these characters?

Top Ten Tuesday – 10 Book Covers That Feature Typography I Like 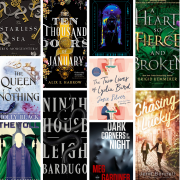 Top Ten Tuesday – Books I Plan to Read This Summer

Top Ten Tuesday – My Reading and Blogging Goals for 2022 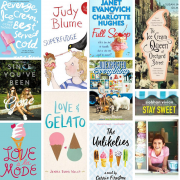 Top Ten Tuesday – I Scream, You Scream, We All Scream for Ice Cream
32 replies