The Love Hypothesis by Ali Hazelwood
Also by this author: Love on the Brain

The Love Hypothesis by Ali Hazelwood is quite possibly the sweetest, most adorable romance novel I’ve ever read.  It checked so many boxes for me (a STEM heroine, the fake dating trope, hilarious banter, and so much more) and it just had me grinning from ear to ear pretty much the entire time I was reading.

The story follows Olive Smith, a third-year Ph.D. candidate at Stanford.  Olive has just learned that her best friend, Anh, is attracted to Jeremy, a guy Olive used to date.  Anh and this guy have major chemistry but Anh doesn’t want to hurt Olive by dating him.  Olive thinks that’s sweet and is grateful to have such a loyal friend but she also knows that Anh and Jeremy would actually be perfect together.  Olive decides to also be a great friend and let Anh think she is head over heels in love with a new guy so that Anh will go for it with Jeremy.  The next time she sees Anh, Olive panics, grabs the first guy she sees and plants a kiss on him.  There’s just one problem – the guy she kisses is none other than Adam Carlsen, a rock star of a professor who also happens to have a reputation for being an ass and making his students cry.  Not exactly who Olive had in mind, to say the least, but to her utter shock, once she explains to Adam why she did what she did, he agrees to fake-date her so that Anh and Jeremy can get together.

I honestly can’t even get over how much I adored both Olive and Adam.  As we’ve established, Olive is such a lovely friend who would clearly do anything to help a friend find happiness.  I also just found her overall personality delightful. She’s smart, determined, resilient, and she’s also hilarious. Once she gets comfortable fake dating Adam, he repeatedly calls her a pain in his rear because she’s always gently mocking and teasing him about his awful reputation and of course tormenting him with her love of all things pumpkin spice, lol.  After hanging out with him just a few times, Olive has picked up on the fact that Adam is anything but an ass. He’s actually quite sweet and surprisingly soft, and she can really open up to him in ways she never has with anyone else. I loved watching the two of them interact because they really did bring out the best in each other and I loved the slight tension as they each began to realize that their feelings for each other weren’t fake at all.

Aside from the romance, the author also tackles some more serious topics, such as the challenges women face in academia, particularly in STEM.  She explores sexism, bias, and what happens when a professor grossly abuses his power. The romance definitely takes center stage and makes up the bulk of the story, but I liked having these “meatier” topics to add some depth to the overall story.

I could go on and on about how much I adored the book. If you’re looking for a charming and heartwarming romance that features lovable characters, witty banter, and fake dating, be sure to check out The Love Hypothesis.  It’s an absolute gem of a book that I will be recommending to every romance reader I know. 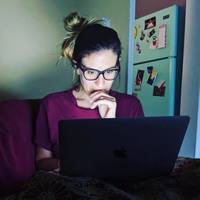