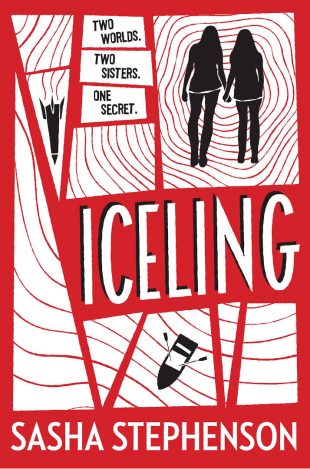 FTC Disclosure: I received a complimentary copy of this book from First to Read. All opinions are my own..

Goodreads Synopsis:  Lorna’s adopted sister, Callie, is part of a mysterious group of non-lingual teens, Icelings, born on a remote Arctic island, who may not be entirely human. Now Callie wants to go home.

Because Callie is an Iceling—one of hundreds of teens who were discovered sixteen years ago on a remote Arctic island, all of them lacking the ability to speak or understand any known human language.

Mysterious and panicked events lead to the two sisters embarking on a journey to the north, and now Lorna starts to see that there’s a lot more to Callie’s origin story than she’d been led to believe. Little does she know what’s in store, and that she’s about to uncover the terrifying secret about who—and what—Callie really is.

As a lover of books, it pains me to read a book and not completely fall in love with it.  The only thing worse than reading a book and not loving it is to then have to sit down and write a review explaining the lack of love I feel.  But that’s unfortunately where I am with Iceling.  Let me start by saying that I don’t think I was anywhere near the target age for this book so that should definitely be taking into account if you’re trying to decide if you should give this book a shot.

What I Liked About Iceling:

Sounds pretty good so far, right?  So why didn’t I rate it higher?  Well, unfortunately, what I didn’t like about Iceling far outweighed what I enjoyed about it.

What I Disliked About Iceling:

There was also a tendency by the narrator to over explain things that were fairly self-explanatory, like Lorna and her friend Mimi driving around “dog-calling” boys.  A couple of examples of said “dog calling” made it completely apparent that “dog calling” is their version of males and their “cat calling.”  I didn’t then need what was basically a textbook definition of “dog callng” to make sure I understood what they were doing. It felt like being spoon fed.

That, on its own, probably wouldn’t have bothered me all that much, but when it was coupled with minimal elaboration on what I considered to be crucial elements of the plot – like, for example, what is going on with Callie and these conniption fits that periodically have her rushed off to the hospital for mystery “treatments” that family members aren’t allowed to witness.  Or how about the mysterious adult Iceling they encounter on their journey to the Arctic who pops up out of the ice and then disappears without a trace? Who or what was that? That’s not really something to toss out there and leave hanging with no real explanation or follow up.

Now let me say up front that I had issues with Callie and Lorna’s parents leaving them alone for weeks while they traveled to the Galapagos Island.  You know your one daughter is prone to these weird fits and sometimes has to go to the hospital, but you’re cool with leaving teenage Lorna in charge.  Bad Parenting 101, but okay, fine. Bad parenting happens so I can roll with it.

I also struggled a bit with this journey that Lorna and Callie, accompanied by Stan and his Iceling brother Ted, take north to the Arctic.  The trigger for this trip is that both Callie and Ted, even though they were nowhere near each other at the time and had never communicated with one another before, had both simultaneously crafted models of what Lorna and Stan assume is their Arctic homeland.  Again, seems a little odd to pile your Icelings in the car and go on a road trip to the Arctic of all places, but again, stranger things have happened, so I was still hanging in there.

What I could not just roll with, however,  was the fact that it wasn’t just Lorna and Stan who came to this conclusion.  As they get further north, they encounter dozens and dozens of cars containing Icelings, each holding models of the same Arctic island.  So, we’re supposed to believe that every single family that had an Iceling simultaneously came up with the same perfect solution to this odd event:  ROAD TRIP TO THE ARCTIC!

I can’t say too much more about plot holes without spoiling major elements of the story but there  were several other similar plot holes that just left me shaking my head the further I got into the story. Much of the story felt like trying to put together a puzzle that has several missing pieces. You kind of get the whole overall picture, but there are still nagging missing details.

Who Would I Recommend Iceling to?

Even though it wasn’t really for me, I still think it could have the potential to be a great sci-fi read for younger readers. I’m thinking freshmen or sophomores in high school,  being much closer to Lorna’s age than I am, might more readily relate to her —  and especially to what’s going on in her head  –  than I could.

Sasha Stephenson holds an MFA in poetry from Columbia University and lives in Brooklyn, New York. This is his first novel.