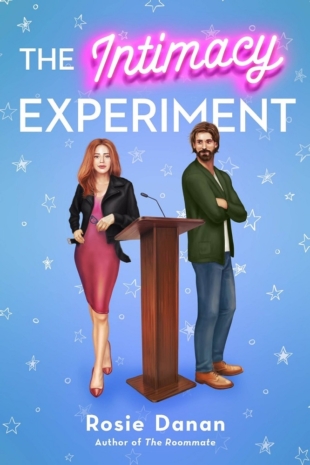 The Intimacy Experiment by Rosie Danan
Also by this author: The Roommate

Naomi and Clara, the protagonist from The Roommate, are co-CEOs of a successful website that educates its subscribers about sexual satisfaction. Naomi has also decided she would like to teach some classes on relationships and intimacy and is looking for a forum where she can make that happen.  As always, Naomi is smart, sassy, and determined to get what she wants, but she’s getting frustrated that she can’t get anyone to take her seriously.  That is until she meets Rabbi Ethan Cohen at a seminar.  Ethan has been trying to figure out a way to attract more younger members to his synagogue and when he hears Naomi’s passionate speech about what she wants to teach, he invites her to design a seminar series on Modern Intimacy.  At first Naomi wants no part of this proposal, but then she reconsiders.  It also doesn’t hurt that Rabbi Ethan is super sexy and Naomi is finding it hard to resist his charms.

There’s so much I enjoyed about this book but the chemistry between Naomi and Ethan was definitely a high point.  I loved watching Naomi and Ethan design the course together.  Even though they’re an unlikely pair, they just worked together so perfectly and the more they worked together, the more they became invested in each other. I loved the contrast between Naomi’s feisty independence and Ethan’s loyalty and devotion.  Ethan is like a Golden Retriever and I just adored him and wanted Naomi to stop fighting her attraction to him.

If you enjoy romance that is a slow burn, you’ll enjoy Naomi and Ethan’s journey because fighting their attraction to each other is definitely a big part of the story.  Also, where The Roommate is filled with sexy, steamy intimate scenes, this book features way fewer scenes of that variety.  As much as I enjoyed the romance of Clara and Josh in the first book, I actually preferred the slower pace and the deeper issues involved as Naomi and Ethan were both so conflicted as to whether or not it would be appropriate for them to be together.  I also liked that we got a little insight into the Jewish faith as Naomi, who is also Jewish, decides to take some courses to learn more about the faith she hasn’t practiced since she was a child.

One last thing I loved was the Intimacy seminar itself and the way Danan presents it.  It’s as if we’re attending all of the courses as well.  I loved watching Naomi teach, Ethan sitting in the audience lending his support, and also how enthusiastic the young attendees were as Naomi explores topics such as being honest with yourself and potential dates about what you’re looking for in a relationship, how to meet people in the first place, how to take a relationship to the next level, and how to survive a breakup.  I thought the seminar was brilliant and wished I could have taken a course like it back during my single days. It would have made dating life so much easier to navigate!

If you’re looking for an original, sexy romance I highly recommend The Intimacy Experiment.  The characters are immensely likable, the storyline is both fun and thought-provoking, and the ending will leave you with a smile on your face.  I loved every page of it and look forward to reading more from Rosie Danan. 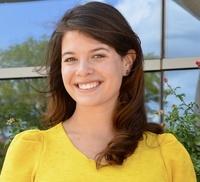 The Roommate by Rosie Danan
Also by this author: The Intimacy Experiment

The characters are what really sold me on this story, mainly because they weren’t at all what I expected them to be like based on the usual stereotypes associated with socialites and porn stars.  Clara is pretty much the exact opposite of a Paris Hilton type.  She’s sweet, awkward, and lacks confidence when it comes to most areas of her life.  When the story opens, Clara has also just quit her job and moved from New York to California to live with her childhood crush because she has misread his signals and thinks she’s heading toward her happily ever after.  Instead of happily ever after, however, Clara finds herself shacking up with a random male roommate her crush has found on Craigslist and sublet his place to while he goes on tour with his band.  Talk about awkward!

Josh, the roommate in question, is just as endearing as Clara.  At first he comes across as very arrogant – he’s obviously proud of his ability to please women, but he’s also very charming, fun, and sweet, and pretty soon Clara warms up to him and so did I.  I grew to love him even more as Clara gets to know him better and it becomes clear that some of that arrogance is just a front.  Josh has a lot of layers to him, and just like with Clara, some of those layers are filled with insecurities, fears, and doubts.   I just loved how real both characters felt and how their relationship developed.  Yes, they certainly have their sexy, steamy moments filled with delicious banter, but they also have a lot of sweet, heartfelt moments that made me smile.

The Roommate also has its fair share of drama, some revolving around family expectations, but also specifically drama that revolves around the porn industry.  I really loved how Danan portrays all of the adult entertainers as scrappy underdogs fighting the greedy corporate villains for what is rightfully theirs.  She gives the readers an interesting look at what goes on behind the scenes and I really liked the depth it added to the story.  I also adored Josh’s ex, Naomi.  She’s Josh’s partner in most of his adult films and she’s also a badass in her own right.  I read that there will be a companion novel that focuses on Naomi, and I cannot wait to get my hands on a copy!