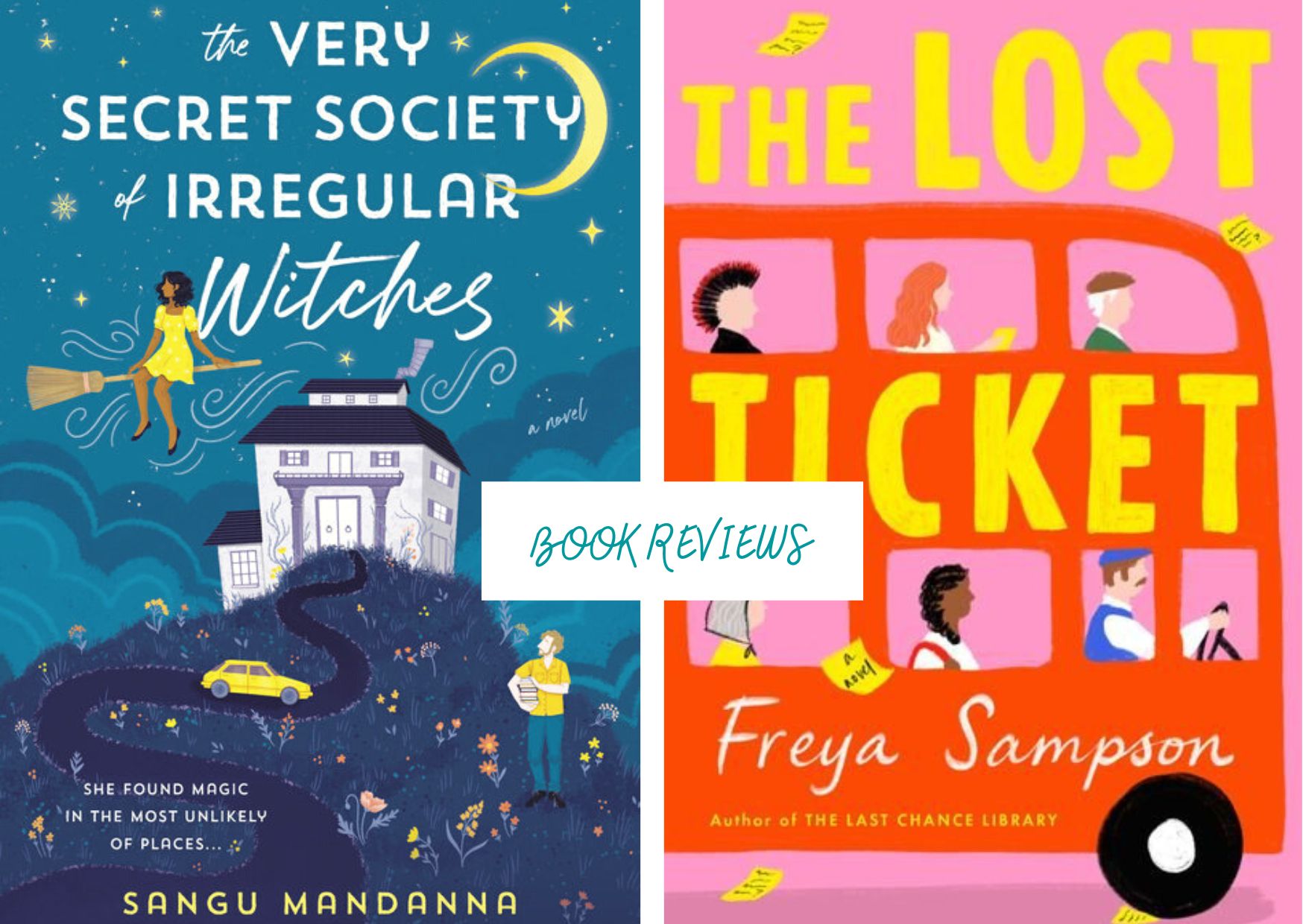 Happy Friday! How in the world is it September already?  I have to admit I’m ready for fall though.  Bring on the sweater weather! Anyway, I’m back today with reviews for two brand-new releases that share a common theme – found families.  I’m a sucker for a good found family story so I’m thrilled to share my thoughts on both of these with you.

If there was a literary genre called cozy fantasy, that’s where The Very Secret Society of Irregular Witches by Sangu Mandanna would be.  This book is pure magic in every sense of the word –  it’s whimsical, full of heart, and it has a found family vibe that reminds me of TJ Klune’s The House in the Cerulean Sea.

The story follows Mika Moon, a young orphaned witch who has been raised to hide her magic from others and to stay away from other witches so as not to draw the attention of non-witches.  Mika therefore is used to living a lonely life, but when an opportunity arises for her to move to a place called Nowhere House to teach three young witches how to control their magic, Mika jumps at the chance, having no idea how much her life is about to change.

Mika is an easy character to fall in love with.  I felt tremendous sympathy for her knowing what an isolated life she had been living for so many years.  Mika also has a huge heart, as we quickly see once she arrives at Nowhere House and starts working with the children.  There’s an almost Mary Poppins-like quality to her that I especially enjoyed.  It was fun to watch her interact with the children and to watch her get under the skin of Jamie, the grumpy but sexy librarian who happens to be the children’s guardian.

Mika’s scenes with the children, Rosette, Altimira, and Terracotta were my favorites from the book.  Rosette is the quintessential good girl, polite, sweet-natured, and eager to please.  Altimira is hilarious. She says whatever comes to mind, no matter how inappropriate, no filter whatsoever, and provides many laugh out loud moments.  Terracota is the most challenging of the group, basically introducing herself to Mika by asking her how she would prefer to die.  Such a lovely child, haha.  I adored each of the children in their own way and loved watching Mika bond with each of them.

The found family vibe I mentioned earlier is truly what makes this book such a special read because at Nowhere House, Mika finds the family she never had but has always wanted.  The characters who live at Nowhere House, from the retired stage actor and his spouse who are the house’s caretakers, to the grumpy librarian and his three witchy charges, are quite the quirky bunch, yet they have somehow managed to form a close-knit group and are eager to welcome Mika in with open arms.  Jamie and Terracotta obviously take some work but it’s fun watching Mika win them over.

The Very Secret Society of Irregular Witches is a magical story about love, family, and about becoming the person you were meant to be.  If you’re in the mood for a cozy, uplifting witchy read, this is definitely the book for you. 4.5 STARS

The Lost Ticket by Freya Sampson is the most heartwarming, feel good book I’ve read all year.  The story follows what happens when strangers on a bus come together to try to help an elderly man find the love of his life.  Reading it felt like I was being given a warm hug and I just loved every page of it.

Libby Nichols moves to London after being dumped by her boyfriend.  Her heart is broken and her life is a mess, and she could really use a distraction from her misery.  While riding the number 88 bus one day, she meets a friendly elderly gentleman named Frank.  Frank tells Libby that back in 1962, he met a young red haired woman on the same bus.  He and this young woman really connected during the journey and made plans to go out together.  The woman wrote her number on a bus ticket and gave it to Frank, but by the time he got home, Frank realized he had lost the ticket.  Frank confides to Libby that he is still riding the number 88 all these years later in hopes of finding her. Libby is so moved by Frank’s story that she feels compelled to help him try to find the mystery woman.

I absolutely adored Frank. He’s such a sweet old man, and as soon as you hear his story, you can’t help but cheer him on and hope that he finds this woman.  It’s especially poignant because Frank is in the early stages of dementia and is well aware that he could very easily forget all about her before he has ever had a chance to see her again.  I also loved that even though this quest starts out as a distraction for Libby, she quickly becomes very invested in Frank and thinks of him as practically family.  It was really sweet to watch the two of them bond.

Libby is just as likable as Frank is.  I felt so much sympathy for her after her break up.  Her ex made her feel so bad about herself, and then her own family doesn’t do much to make her feel any better. Instead, they just pile on and make her feel worse.  I loved that she found Frank because he was just such a breath of fresh air and exactly what Libby needed to start feeling better about herself and her life.

While the friendship between Libby and Frank is a highlight, it becomes even more special when their connection expands to include Dylan, who is Frank’s caregiver, and Esme, who is Dylan’s friend.  Dylan and Esme, as well as another passenger from the bus, all join in the efforts to find Frank’s mystery woman. There are some bumps in the road between Libby and Dylan, who are clearly attracted to one another, but  they all end up very close, the found family that Libby needs since her own family isn’t being overly supportive.  I just love the idea that a chance meeting has the potential to be such a life-changing experience for so many people.

I don’t feel like I’m doing The Lost Ticket justice with anything I’m writing because it just has this special quality that is hard to explain and it was the ultimate comfort read for me.   If you’re in the mood for an uplifting and poignant read, this is the book you’re looking for.  5 STARS

Thriller Thursday Reviews: The Last to Vanish & The Patient’s Se...