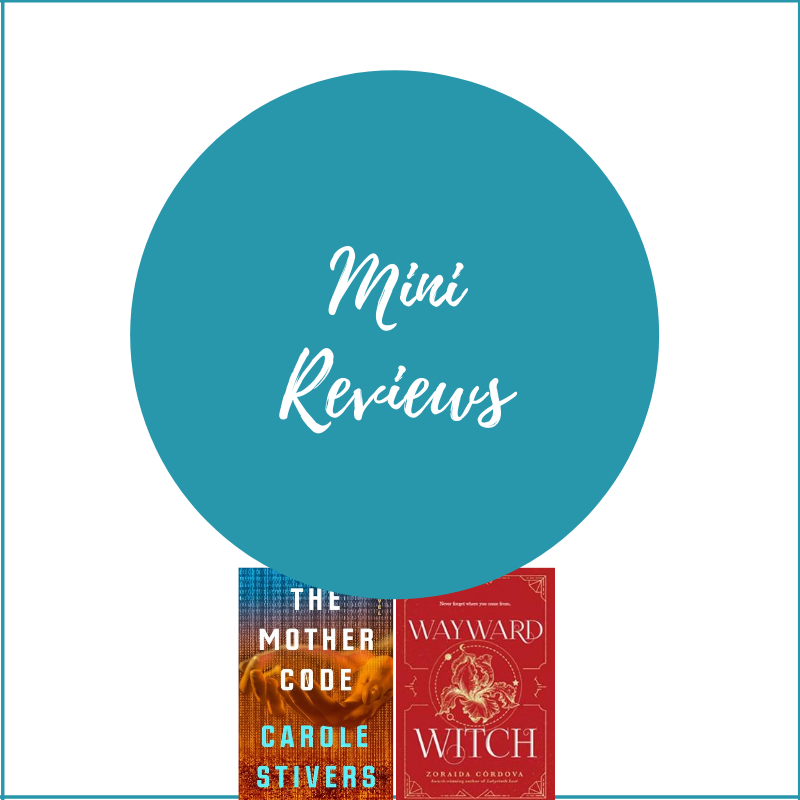 This past week has been busy with my son starting the new school year from home, with socially distanced soccer continuing to gear up, and with me trying to achieve a healthy work/home balance in the middle of all of that.  We’ve had a few hiccups along the way, but overall we’re doing well with our new normal.  I didn’t get much reading done this week, but I did manage to squeeze in a little science fiction and some YA fantasy with The Mother Code and Wayward Witch.

Carole Stivers’ The Mother Code is a frightening cautionary tale about what can happen when government officials think they know more than scientific experts.  When the story opens, the U.S. government has deployed a lethal bioweapon without waiting for their team of experts to give final approval for its use.  As they quickly realize, there are serious flaws with the bioweapon and it should not have been deployed.  It begins to spread well beyond the area it was unleashed in and increasing numbers of people start dying, to the point that the government fears they may have just doomed the human race to extinction.

An elite team of scientists is handpicked to try to find a way to stop the bioweapon, or if it can’t be stopped, come up with Plan B, a way to ensure the survival of the human race.  Plan B is to create genetically engineered babies who can withstand the effects of the bioweapon and to have robots nurture and educate them that have been programmed with a computer code they’ve designed called the “Mother Code.”  Their frantic efforts to save mankind become an intense race against the clock that had me riveted the entire time I was reading.

I did struggle with the story a couple of times along the way, mainly because it’s more plot-driven than character-driven.  Since the characters took a backseat to the action of the story, I didn’t really connect with them all that much.  I really like to connect with the characters I’m reading about so this was kind of a bummer.  Also, this is science fiction that is very heavy on the science.  That’s not a bad thing and thankfully the author explains the bioweapon and its fatal flaw in a very accessible way, but it definitely slowed me down as I absorbed and made sense of what I was reading.

Finally, I have to admit that I almost decided against reading Carole Stivers’ The Mother Code.  Since I like to read to escape reality, reading a book about a manmade pandemic while we are actually going through a pandemic seemed counter-intuitive.  I’m glad I decided to go ahead and read it though because The Mother Code is both a riveting story of survival as well as a thought-provoking read about science and ethics.  3.5 STARS

Zoraida Córdova’s new novel Wayward Witch is the third installment in her Brooklyn Brujas series.  For those familiar with this magical series, this book follows Rose, the young Mortiz sister.  Events from the prior books have transformed Rose’s powers into something that is wholly unfamiliar to her. Add to that the return of her father after an unexplained seven year absence and it’s easy to see why Rose is feeling off kilter.  In the middle of an argument with her father, the two of them are kidnapped and dragged off to a fairy realm called Adas.  There she is told that the realm is in danger and she’s the only one who has the power to save it.  Since Rose doesn’t even know what her power is anymore, she’s not sure how that’s supposed to work, but when her captors lock her father in a tower, she decides she better figure it out.

What I have loved about every book in the Brooklyn Brujas series is the focus on family and that same focus is present throughout this book.  Rose is desperate to get back to her sisters and her mother, just as she is equally determined to confront her father about leaving them alone for so many years.  The family dynamics are very complicated in the Mortiz house but as always, the emotions feel so authentic.

I also loved following Rose on her adventure to save the fairy realm. Córdova’s worldbuilding is exquisite, filled with vivid details and infused with mythology as well as Latinx cultural references.  I especially loved the contrast between the healthy parts of the realm, which  are lush and vibrant, versus those parts that have been ravaged by a destructive and evil rot that threatens to consume them all.  Rose is charged with finding and destroying the source of this mysterious rot, and I was completely invested in her journey, both the physical journey and the psychological journey as she discovers who she is as a Bruja now that her powers have so drastically changed.

I believe Wayward Witch is the final installment in the Brooklyn Brujas series and if so, it’s a very satisfying conclusion to the series.  If you enjoy witchy stories that also focus on family and sisterhood, along the lines of Charmed, I definitely recommend this series.  4 STARS.

Top Ten Tuesday – I Scream, You Scream, We All Scream for Ice Cream
Scroll to top