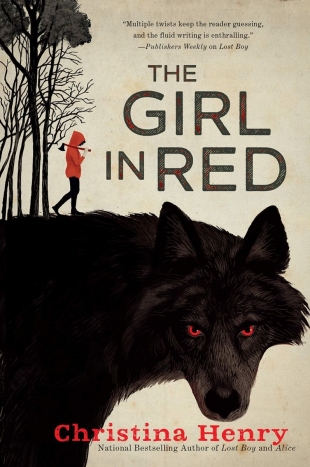 The Girl in Red by Christina Henry
Also by this author: The Mermaid

THE GIRL IN RED Review

Christina Henry’s latest novel, The Girl in Red, is everything I didn’t know I needed in a fairytale retelling.  The Girl in Red is not just a retelling of Little Red Riding Hood; it’s also a postapocalyptic survival story that features a deadly virus that has wiped out thousands of people, and an ax-wielding, modern day Little Red Riding Hood character.  The world doesn’t resemble the world Red grew up in. Survivors are desperate and the rule of law has pretty much been thrown out the window, but Red is determined to survive and make it to the safety of her grandmother’s house, no matter who or what stands in her way.

Red was of course my absolute favorite part of the story.  I just truly loved everything about her.  She’s smart, sassy, resourceful, and incredibly determined to survive no matter what.  She also has an extensive knowledge of post-apocalyptic survival skills, much of which she has acquired from the many books and horror movies she has watched.  Her family actually mocks her for her obsession with being ultra-prepared to survive an apocalypse, but I have to say after reading just a few pages, I was convinced Red was just the person I’d want in my corner if the unthinkable were to ever happen.  I loved that she was so practical and that she managed to stay calm no matter what was going on around her.

I also loved the way that Henry unfolds this riveting tale.  She uses a dual timeline format where we are presented with “Before” and “After” chapters. Each “After” chapter is presented first and illustrates that something major has happened, and then that chapter is followed by a “Before” chapter that shows the lead up to the event from the “After” chapter.  When the story first opens, for example, we see that Red is traveling on her own but we learn soon afterwards that she and her brother were initially traveling together.  We then follow along and learn what has happened to separate Red from her brother.  I loved this technique because it creates so much tension and suspense.  As soon as I realized Red’s brother had been with her but wasn’t anymore, I just had to know what had happened to him.

I don’t want to give away any major plot points so that’s all I’m going to say, but if you enjoy retellings, gripping post-apocalyptic survival tales, or just really want to read a truly unique story, I highly recommend Christina Henry’s The Girl in Red.

From the national bestselling author of Alice comes a post-apocalyptic take on the perennial classic “Little Red Riding Hood”…about a woman who isn’t as defenseless as she seems.

It’s not safe for anyone alone in the woods. There are predators that come out at night: critters and coyotes, snakes and wolves. But the woman in the red jacket has no choice. Not since the Crisis came, decimated the population, and sent those who survived fleeing into quarantine camps that serve as breeding grounds for death, destruction, and disease. She is just a woman trying not to get killed in a world that doesn’t look anything like the one she grew up in, the one that was perfectly sane and normal and boring until three months ago.

There are worse threats in the woods than the things that stalk their prey at night. Sometimes, there are men. Men with dark desires, weak wills, and evil intents. Men in uniform with classified information, deadly secrets, and unforgiving orders. And sometimes, just sometimes, there’s something worse than all of the horrible people and vicious beasts combined.

Red doesn’t like to think of herself as a killer, but she isn’t about to let herself get eaten up just because she is a woman alone in the woods…. 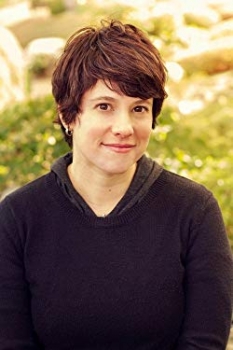 CHRISTINA HENRY is the author of the CHRONICLES OF ALICE duology, ALICE and RED QUEEN, a dark and twisted take on Alice’s Adventures in Wonderland, as well as LOST BOY: THE TRUE STORY OF CAPTAIN HOOK, an origin story of Captain Hook from Peter Pan.

She enjoys running long distances, reading anything she can get her hands on and watching movies with samurai, zombies and/or subtitles in her spare time. She lives in Chicago with her husband and son.

Top Ten Tuesday – My 10 Most Anticipated Releases for the Second Half...
Scroll to top