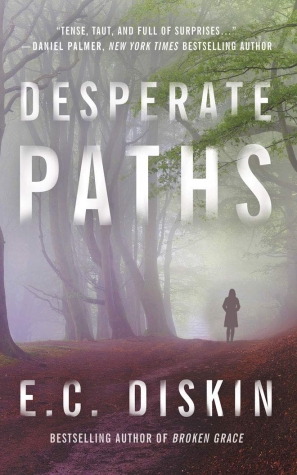 Desperate Paths by E.C. Diskin
Also by this author: Depth of Lies

E.C. Diskin’s Desperate Paths opens with main character Brooklyn Anderson sitting in a jail cell in Eden, Illinois and we immediately learn that she is considered a potential suspect in the murder of her father. As Brooklyn sits in the cell wondering how she has landed in this mess, the story then flashes back to a week earlier when Brooklyn, an aspiring actress living in New York, receives a phone call from her estranged sister, Ginny, begging her to please come home because their dad has fallen and broken a hip.

As soon as Brooklyn comes face to face with her sister, she can tell that Ginny isn’t being completely honest with her about what happened to her dad.  The details don’t add up and she flat out catches Ginny in more than one lie.  While Brooklyn is at the hospital, she runs into the town sheriff, who happens to be a close family friend. She learns from him that former Eden resident and now famous actor, Darius Woods is also in the hospital, fighting for his life.  Darius had written a screen play that would bring to light some very ugly truths about the town of Eden and some of its residents.  Not many people knew about the script yet, but those who did know, knew how explosive it would be.  Within hours of Darius returning to Eden to visit his dad and talk about the script, someone shoots him.

As law enforcement investigates the shooting and Brooklyn continues to try to get the full truth about what has happened to her father from Ginny, Brooklyn discovers some uncomfortable truths about her own family and realizes her entire life has been nothing but a lie.

Diskin’s setup for the story is brilliant because within a few pages, my mind was already starting to churn with questions I’m dying to know the answers to.  How in the world does a daughter rush home to care for her father and end up in jail in danger of being charged with his murder? Why can’t Brooklyn get a straight answer from her sister about their Dad’s fall?  What shocking truths does Brooklyn uncover about her family?  Where does Darius fit into all of this or is his shooting completely unrelated?

I also got really caught up in the messy sibling relationship between Brooklyn and Ginny. Brooklyn is adopted and is much younger than Ginny, so Ginny has rarely shown much interest in being a part of Brooklyn’s life.  This made me sympathetic to Brooklyn right away, as did seeing her in the opening pages working so hard to make her dream of becoming an actress a reality.  Brooklyn is determined and resourceful, but is also willing to drop everything at a moment’s notice to rush home and care for her father.  Because I found her such a likeable character, I was all the more invested in finding out how in the world she had landed herself in a jail cell.

Ginny, on the other hand, was not an especially likable character, at first.  She’s telling lie after lie to Brooklyn and to others, and it quickly becomes clear to Brooklyn that Ginny and her father are hiding something.  I was not a fan of Ginny’s deception and found myself actively disliking her.  I don’t want to give away any spoilers though so I’m just going to say that something Brooklyn discovers late in the story makes me take a second and more sympathetic look at Ginny.

The way the story is presented really appealed to me too.  We watch the drama unfold from the perspectives of Brooklyn, Ginny, and the Sheriff, and the three perspectives are so unique because Brooklyn is actively seeking truths about her family, while Ginny is actively trying to hide something, and all the while, the Sheriff’s investigation seems to be leading him closer and closer to the Anderson family.  The story was clearly building towards an explosive conclusion, but alternating between these points of view and their conflicting objectives effectively kept me guessing until the very end about how all of these seemingly unrelated events would tie together.

I also liked that Diskin isn’t afraid to infuse her story with some hot-button social issues.  Again, I don’t want to give away any spoilers since these social issues are a major contributing factor to the events of the story and the truth that Brooklyn and the Sheriff seek, but basically if it’s an issue that’s being covered in the news right now, it’s an issue that is mirrored in Eden, Illinois as well.

Overall, I thought Desperate Paths was an addictive read that kept me on the edge of my seat as I watched everyone’s secrets being exposed.  That said, however, I did find myself shaking my head at Darius Woods. Considering he grew up in Eden and knew exactly what kind of people he was dealing with, it seems like he should have known his script would not go over well.  In a tiny town like Eden where everyone knows everyone else and, of course, knows all of their personal business too, changing the names of characters doesn’t really go very far to protect any identities, especially if you’re calling your film Surviving Eden.  Darius obviously did not deserve to be shot for this, but it just seemed so naïve on his part and had me yelling at him a few times while I was reading, especially because he seemed like a pretty smart guy otherwise.

I went into E.C. Diskin’s Desperate Paths expecting to read an exciting thriller, and while I definitely got that, I feel like I also got so much more.  Yes, there’s a death and another attempted murder that drive much of the plot, but at its heart, Desperate Paths is really a family drama about the lengths family members will go to in order to protect their own and the dangers of what can happen when long-held secrets and betrayals are suddenly laid bare for the world to see.

She knew everything about her family and her town. Except its secrets.

Brooklyn Anderson knows it looks bad. She was found wiping down a gun. His blood on her hands. Her father now dead. The incomprehensible nightmare has started.

Seven days earlier, Brooklyn had returned to Eden to care for her beloved father, who lay helpless in a hospital bed. Her estranged sister, Ginny, said he fell. But as Brooklyn soon realizes, Ginny is prone to lying.

Former Eden resident Darius Woods was in the hospital too. The famous actor had written a screenplay that would lay bare all the secrets of the town, but within hours of his return, someone shot him.

As the Woods investigation proceeds, and Brooklyn starts to question everything she believes about her family, her neighbors, and her home, secrets and lies begin to unravel. But nothing can prepare her for where those lies will finally lead.

And sharing the truth of what happened the night her father died might just make things worse. 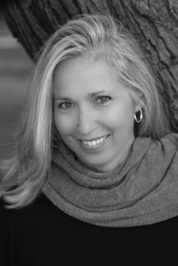 E.C. Diskin studied Radio/TV/Film and English in Texas (TCU), moved to New York to dance with a tap dance company in Soho, and finally became “an adult” when she moved to Chicago for law school. But after several years behind a desk, a drawer full of story ideas, and two little ones at home, she took a break from the law and began writing fiction. Fortunately, the fantasy of living a creative life became reality with the success of her debut legal thriller, The Green Line. Her second, Broken Grace, ventured into psych thrillers, and her latest, Depth of Lies, dives into the veneers and secrets behind the closed doors of suburbia. When she’s not reading, writing, binge-watching Netflix, chauffeuring kids, or at the movies, she likes to play with power tools and build stuff. 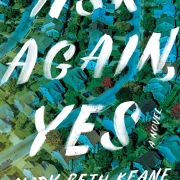 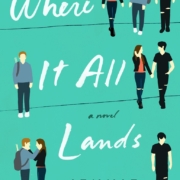 YA Review: WHERE IT ALL LANDS by Jennie Wexler

Top Ten Tuesday: 10 Fictional Characters I’d Like to Switch Places with for...
Scroll to top