This week’s TTT topic is Bookish Resolutions/Goals for 2018.  This is a topic that has been on my mind a lot lately since we’re at the start of a new year. I did pretty well with most of my goals last year, but there’s definitely always room for improvement.

MY TOP TEN BOOKISH RESOLUTIONS/GOALS FOR 2018

1.  GET BETTER ABOUT SCHEDULING AHEAD (I.E. STOP PROCRASTINATING!)

Procrastinating is probably one of my worst habits as a blogger and it’s something I really need to work on.  I finally started using the built-in Schedule Posts feature on my blog late last year, but thus far, I’ve not been very good at scheduling more than a few days ahead.  I’d like to work toward having at least 2 weeks’ worth of posts scheduled at all times.  I’m a procrastinator at heart but if I can improve on this, it will make my life so much easier.

2.  MAKE A DENT IN THE ENORMOUS PILE OF UNREAD BOOKS THAT I ALREADY OWN.

Between the physical books in my house and the e-books on my Kindle, I probably have enough unread books to keep me busy for at least a couple of years.  It’s time to really do something about that, both in terms of reading more of them and in purging the ones I’m just not interested in reading anymore.  I’ve joined the Beat the Backlist Challenge again this year in hopes that it will keep me motivated to achieve this goal.

This was one of my goals last year as well and while I did okay with it, I’d like to do better this year.  Part of my issue last year in addition to the eternal struggle to come up with topics to write about is that because of my extreme procrastination (see Goal 1), I never seem to have enough time to actually sit down and write discussion posts.  If I can get Goal 1 under control, hopefully there will be more time to work on discussion posts.  I also joined a discussion challenge in hopes of facilitating this goal.

This goal kind of ties in with Goal 2.  I have so many series where I read the first book, loved it, purchased the next books, and then nothing…  Since I am also constantly starting new series, it’s time to finish up some of those that have been lingering for ages.

Now that I’ve been consistently reviewing for almost 2 years, I have been getting approved for a lot more ARCs than I used to.  I’m starting to reach that point where I have too many sitting in my queue waiting to be read and because I don’t want my ARCs to turn into the same problem I have with older books, I want to work on being more selective about the ARCs I request.  I’d love to be able to keep my Netgalley percentage at 80% for more than 10 minutes, lol.

I guess this one is self-explanatory but I also signed up for a challenge to motivate me to achieve this goal.  I’m hoping to read at least 12 debut authors this year.

I’m pretty confident that I will never be one of those bloggers who is able to post everyday.  I’m just not a good enough planner for that, and I know I’d be setting myself up for failure to even attempt it.  I managed to post at least 4 times a week all last year and sometimes even made it up to 5 or 6 posts on weeks where life wasn’t too chaotic.  I’m aiming for 5 posts every week this year. Fingers crossed!

This is probably as much a mental health goal as it is a blogging goal, but I want to really focus on just doing my own thing and not comparing myself to other bloggers.  My favorite part about blogging, aside from the community itself, is that there really is no right or wrong way to blog.  When I first started blogging, I remember reading comments out on social media from fellow bloggers “I don’t understand why some bloggers do __________.” (fill in the blink with the nitpick of your choice).   Comments like that used to stress me out and make me second guess everything I was posting and feel like a failure.  After almost two years of blogging, however, I’m getting better about ignoring comments like that.  Once I was able to do that, I started enjoying blogging so much more.  I want to continue that trend this year.

9.  REMEMBER REAL LIFE IS GOING TO GET IN THE WAY OF BLOGGING SOMETIMES & THAT’S OKAY.

This goal ties in with Goal 8 and not stressing over my blog.   Even though I know real life comes first and that it’s occasionally going to get in the way of whatever I’m doing with my blog, I still have those freak out moments when I don’t get to post as often as I had planned or if it takes me a few extra days to visit all of the blogs I want to visit.  My goal for this year is to really stay mindful of the fact that blogging is a hobby.  If I have to step away from it to attend to real-life issues that come up, it will still be here when I come back.  The blogging community isn’t going to forget I exist because I had to take a few days off.

I had a few moments last year where reading felt like a bit of chore.  I won’t call it a slump because I was still okay with the books I was reading, but even though I enjoyed them, sometimes I felt like I was forcing myself to read popular books even if I wasn’t really into them at the moment.  This year I want to make a point to listen to my inner mood reader.  If my inner mood reader has no interest in reading a popular book that has been super-hyped, but would rather I pick up my old copy of Pride and Prejudice and re-read that instead, then I’m going listen to the mood reader rather than force myself to read something I’m just not feeling at the moment.

Question:  What are some of your bookish goals for 2018? 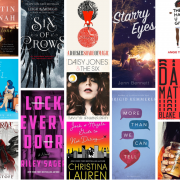