My “Waiting On” Wednesday selection for this week is Scrappy Little Nobody by Anna Kendrick.  I know I just said last week when I spotlighted Lauren Graham’s Talking As Fast As I Can that I’m normally not really all that into books written by celebrities, but what are the odds that two of my favorite actresses would both have books coming out this fall?  I’m excited about this book because I think in addition to being a fantastic actress, Anna Kendrick is also one of the funniest celebrities out there.  I especially love following her on twitter because you just never know what she’s going to come up with next, but it’s always a guaranteed laugh and I have the same expectations for Scrappy Little Nobody. 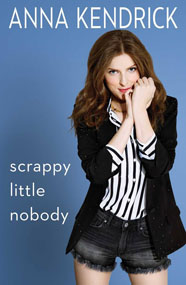 Top Ten Tuesday: 10 Movies guaranteed to distract me from books