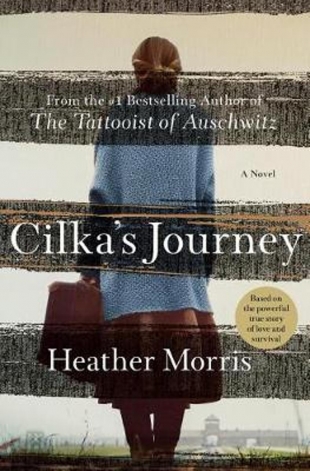 Cilka’s Journey by Heather Morris is the heart-wrenching story of Cilka Klein, who in 1942, at the age of sixteen, is sent to Auschwitz-Birkenau Concentration Camp.  Cilka is a beautiful girl and her beauty catches the eye of some of the guards at the camp, who decide to separate her from her fellow prisoners.  By playing the role these men want her to play, Cilka manages to survive three years in the camp until it is liberated.  Unfortunately, young Cilka’s harrowing journey has just begun.  She is arrested by the Russians, charged as a collaborator for sleeping with the enemy (even though she had no choice in the matter) and is sent to prison for 15 years in Siberia.

While Cilka’s Journey itself is a work of historical fiction, it is based on a true story and as such is just all the more heartbreaking to read.  Cilka is an incredibly sympathetic character. I liked her immediately because of the way she nurtures some of the younger prisoners.  It’s clear that she is a victim of an unfair system and I found myself immediately rooting for her to find a way to survive.  In showing what happens to Cilka from the moment she is arrested, Morris does an incredible job of exposing the many wrongs that all prisoners, but especially female prisoners, faced.  The abuse is rampant, both physical and sexual, the conditions they are kept in are barbaric, and the treatment is inhumane, making the Russians appear, in many ways, not very different from the Nazis.

I thought the pacing of the novel was excellent too.  Because I was so invested in Cilka and worried for her well-being, I was just glued to the book to see how things would turn out for her.

Thankfully though, it’s not all doom and gloom.  Morris shows that there are a few bright spots in Cilka’s life in spite of her prison sentence.  Her cellmates become somewhat of a “found family” for her, and she even befriends a female doctor at the hospital where she has been assigned to do administrative work because of her language skills.  And while working at the hospital, she meets someone who inspires her to think about her future and what her life could possibly be like once she is finally free.  It was nice to have moments like these woven into what is otherwise one heartbreak after another.

With every page of Cilka’s Journey, Morris brings to life Cilka’s heart, her bravery, and her strength.  Her journey is filled with loss and grief, but also with resiliency and the will to live. And while Cilka’s Journey is a harrowing tale of survival, it is also ultimately a story of hope and love.

I didn’t realize when I requested Cilka’s Journey that it is a sequel to The Tattooist of Auschwitz, which I haven’t read yet.  Thankfully, however, it works quite well as a standalone and I highly recommend it to fans of historical fiction, especially from the WWII era.  It’s a powerful read, an emotional read, and one that will stick with you long after you’ve finished the last page.

From the author of the multi-million copy bestseller, The Tattooist of Auschwitz, comes the new novel based on an incredible true story of love and resilience.

Her beauty saved her life – and condemned her.

Cilka is just sixteen years old when she is taken to Auschwitz-Birkenau Concentration Camp, in 1942. The Commandant at Birkenau, Schwarzhuber, notices her long beautiful hair, and forces her separation from the other women prisoners. Cilka learns quickly that power, even unwillingly given, equals survival.

After liberation, Cilka is charged as a collaborator for sleeping with the enemy and sent to Siberia. But what choice did she have? And where did the lines of morality lie for Cilka, who was sent to Auschwitz when still a child?

In a Siberian prison camp, Cilka faces challenges both new and horribly familiar, including the unwanted attention of the guards. But when she makes an impression on a woman doctor, Cilka is taken under her wing. Cilka begins to tend to the ill in the camp, struggling to care for them under brutal conditions.

Cilka finds endless resources within herself as she daily confronts death and faces terror. And when she nurses a man called Ivan, Cilka finds that despite everything that has happened to her, there is room in her heart for love.

Heather Morris is a Native of New Zealand now resident in Australia, working in a large public hospital in Melbourne. For several years she studied and wrote screenplays, one of which was optioned by an academy award winning Screenwriter in the U.S. In 2003, she was introduced to an elderly gentleman “who might just have a story worth telling”. She says the day she met Lale Sokolov changed her life, as their friendship grew and he embarked on a journey of self scrutiny, entrusting the inner most details of his life during the Holocaust. Morris originally wrote Lale’s story as a screenplay – which ranked high in international competitions – before reshaping it into her debut novel, The Tattooist of Auschwitz.