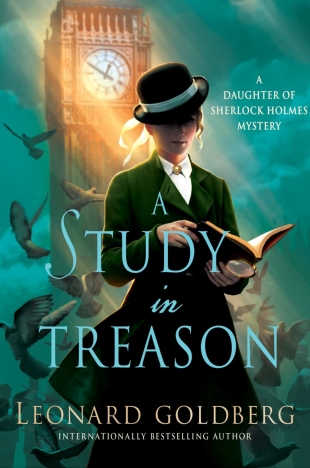 A Study in Treason by Leonard Goldberg

Leonard Goldberg’s A Study in Treason is the second book in the popular series, The Daughter of Sherlock Holmes Mysteries.  These books feature Joanna Blalock, daughter of Sherlock Holmes, and her husband, John Watson, Jr., who is (you guessed it), the son of Holmes’ sidekick, Dr. John Watson, Sr. as they follow in their parents’ footsteps and solve mysteries that are so tough they stump both local law enforcement and the finest detectives at Scotland Yard. I’ve always been a fan of the original Sherlock Holmes mysteries so I thought this would be a fun read

In this second book in the series, there is an imminent threat of war (WWI) and England and France have entered into a secret treaty that details strategies on how they will work together to defeat Germany if they actually do go to war.  The treaty is sent to the country estate of Lord Halifax so that copies of it can be produced, and even though the document is kept under lock and key and the room it is stored in is guarded at all times, somehow the document is still stolen. The local police and Scotland Yard are called in immediately, but when they can’t determine how the document was stolen from a locked and guarded room, Joanna and the Watsons are called in to lend their assistance.

My favorite part about A Study in Treason was actually the mystery itself.  It’s a cleverly crafted locked door mystery, filled with plenty of suspense and twists and turns that kept me guessing as to who the culprit was and how they did it, all the way to the very end.

I also loved the feeling of nostalgia that I got while reading because Goldberg does such a fine job of writing the story in the style of the original Sherlock mysteries and in capturing the atmosphere of pre-WWI England.  In that sense, I think this series makes for a great complement to the original series.  It was like meeting up with an old friend after many years.

Speaking of meeting up with old friends after many years, I also really loved seeing Dr. Watson again.  Sherlock has unfortunately passed away by the time this story is set, but Watson is still with us and it just warmed my heart to see him and especially to see how wonderful his relationship with his son is.

I also liked Joanna, well most of the time anyway. She’s quite the feminist and doesn’t put up with anyone treating her as less than capable because of her gender.  She is also truly a chip off the old block, both in terms of her personality and her investigative skills. She’s like Sherlock in a dress and is quite a fun character to follow around, as many of her mannerisms even mimic dear old dad’s.

As much as I liked Joanna, I unfortunately also had some issues with her as well.  Some of the clues Joanna found while investigating seemed like clues that any trained member of law enforcement should have also been able to locate.  In that sense it almost felt like other characters were being “dumbed down” to make Joanna appear more superior.

I also wasn’t a big fan of the way she would micro-manage everyone around her as if they were dimwits who couldn’t think for themselves at all.  There was one scene in particular where she wants her husband John to observe what one of their suspects is doing, but to do so without being seen.  She actually instructs him to hold his hand up next to his face to shield his face from view, as if he doesn’t have enough common sense on his own to figure out how not to be recognized.  She speaks in a similarly condescending tone to Dr. Watson at times, as if he’s a child, and I found it annoying.  Then, if they did something well or came up with an idea on their own, she would praise them as if they were pets.  I half expected her to reward them with treats every time they did something that pleased her.  That same arrogance used to occasionally annoy me about Sherlock, so I guess it’s not surprising that it annoys me with his daughter as well, lol.

Overall, I found A Study in Treason to be an entertaining read. If you’re a fan of Sherlock Holmes or even just a fan of mysteries, in particular, locked door mysteries, I’d definitely say to give it a try.

A continuation of USA TODAY bestselling author Leonard Goldberg’s The Daughter of Sherlock Holmes, A Study in Treason is a new intriguing locked room mystery for Joanna and the Watsons to solve.

The following case has not previously been disclosed to the public due to the sensitive information on foreign affairs. All those involved were previously bound by the Official Secrets Act. With the passage of time and the onset of the Great War, these impediments have been removed and the story can now be safely told.

When an executed original of a secret treaty between England and France, known as the French Treaty, is stolen from the country estate of Lord Halifax, Scotland Yard asks Joanna, Dr. John Watson, Jr., and Dr. John Watson, Sr. to use their keen detective skills to participate in the hunt for the missing treaty. As the government becomes more restless to find the missing document and traditional investigative means fail to turn up the culprit, Joanna is forced to devise a clever plan to trap the thief and recover the missing treaty.

Told from the point of view of Dr. John Watson, Jr. in a style similar to the original Sherlock Holmes stories, A Study in Treason is based partly on facts in our world and partly on the facts left to us by Sir Arthur Conan Doyle.

Full of excitement and intrigue, this mystery is sure to be enjoyed by fans of Sherlock Holmes as well as the works of Laurie R. King and Charles Finch 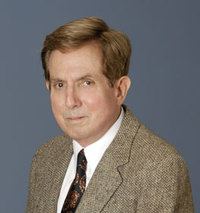 Leonard Goldberg is an American physicist, professor of medicine, and the author of the Joanna Blalock series of medical thrillers.

His novels have been translated into a dozen languages and sold more than a million copies worldwide. Leonard Goldberg is himself a consulting physician affiliated with the UCLA Medical Center, where he holds an appointment as Clinical Professor of Medicine. A sought-after expert witness in medical malpractice trials, he is board certified in internal medicine, hematology and rheumatology, and has published over a hundred scientific studies in peer-reviewed journals.

Leonard Goldberg’s writing career began with a clinical interest in blood disorders. While involved in a research project at UCLA, he encountered a most unusual blood type. The patient’s red blood cells were O-Rh null, indicating they were totally deficient in A, B and Rh factors and could be administered to virtually anyone without fear of a transfusion reaction. In essence, the patient was the proverbial “universal” blood donor. This finding spurred the idea for a story in which an individual was born without a tissue type, making that person’s organs transplantable into anyone without worry of rejection. His first novel, Transplant, revolved around a young woman who is discovered to be a universal organ donor and is hounded by a wealthy, powerful man in desperate need of a new kidney. The book quickly went through multiple printings and was optioned by a major Hollywood studio.

Dr. Goldberg is a native of Charleston and a long-time California resident. He currently divides his time between Los Angeles and an island off the coast of South Carolina.