Ten Rules for Faking It by Sophie Sullivan

Sophie Sullivan’s romcom debut novel Ten Rules for Faking It is a lighthearted read about two characters who are both in need of a happy ending.  The story follows Everly, a radio producer who has spent much of her adult life struggling with anxiety, horrendously bad birthdays, and apparently, awful taste in men as well.  Everly’s thirtieth birthday may be her worst yet too as she catches her boyfriend in bed with his assistant and then proceeds to accidentally rant about the cheating snake live on-air to all of her radio shows’ listeners.  The radio station’s manager, Chris, the other protagonist in the story, is initially not excited about the attention Everly’s on-air outburst is going to bring to the station, but when he realizes that nearly all the attention is positive and that all of Everly’s listeners think Everly deserved better, he comes up with a plan that will not only help Everly find someone better, but it could also benefit the radio station and land Everly’s show in a more coveted timeslot. His plan?  A Bachelorette-style radio contest where listeners enter for a chance to go out with Everly and prove that they are the Mr. Right she has been looking for.

The contest premise was so much fun and was definitely a highlight of the story for me.  I also thought the author did a wonderful job of showing just how much anxiety played a role in Everly’s everyday life and particularly as she is faced with the stressful prospect of going on so many blind dates per the rules of the contest.  I also liked the idea of Everly deciding that she really needed to take control of her life, and particularly that anxiety, so that she could really move forward and make things happen.  She comes up with a list of 10 “rules” that she’s going to try to live by, most of which are geared toward her not becoming a hoarder or crazy cat lady but also which force her to step out of her comfort zone and take chances both personally and professionally.  It’s a huge step and I was rooting Everly on every step of the way.

Everly and Chris were also highlights for me.  Both are just such likeable characters and I enjoyed watching them get to know each other better as the contest progressed.  I was an especially big fan of Chris, who is living under the shadow of his father, a cutthroat businessman who doesn’t think twice about pulling the plug on a company without any warning.  I found myself really invested in Chris as he tried to find a way to get out from under his father’s thumb and become a businessman in his own right, and one with a heart.  Watching both Chris and Everly evolve made for an enjoyable reading experience all around.  I did find myself wanting them to move through their issues faster and find their way to each other because this one is definitely a slow burn.

A final highlight for me was the cast of secondary characters at the radio station, especially Everly’s friendship with her DJ, Stacey.  Stacey is the friend who tells Everly what she needs to hear, even when she really doesn’t want to hear it.  As I was reading, I kept thinking it would be fun to read another book all about Stacey because she was such a scene stealer in this book.

If you’re in the mood for a fun and romantic read that will leave you with a smile on your face, give Ten Rules for Faking It a try. 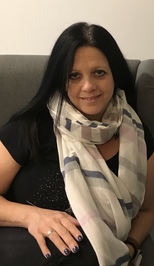