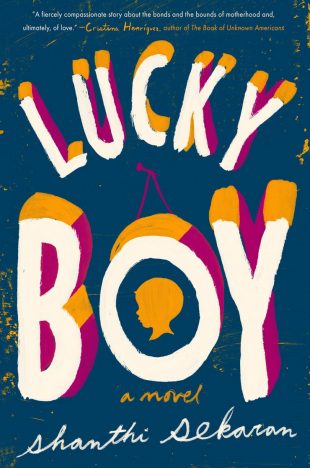 Shanthi Sekaran’s Lucky Boy is one of the most heartbreaking, thought-provoking, and timely novels I’ve read in a long time.  At its heart, Lucky Boy is a story about motherhood.  At the same time, however, it also focuses on illegal immigration, foster parenting, and fertility and how all of these can lead to heartbreak and broken families.

The novel follows the journey of two women:  Soli Castro Valdez, an illegal immigrant from Mexico, and Kavya Reddy, who is the daughter of Indian immigrants.  Kavya is basically living the American Dream – she has graduated from a prestigious college, has a successful career as a chef, and is happily married to Rishi.  Kavya has everything she could have ever wanted in life…until the day she decides she wants a baby.  Kavya and Rishi try for months and months to conceive, even resorting to expensive fertility treatments, but nothing works and their marriage becomes very strained because of the pressure they are putting on themselves.  Still desperate to start a family, Kavya starts thinking about adoption and she and Rishi decide to try the foster parent route.  It is here where Kavya’s life becomes entwined with the novel’s other protagonist, Soli.

Soli is a young woman who leaves her home and family in Mexico and makes the treacherous journey across the border in hopes of making a better life for herself in the U.S. In spite of her undocumented status, Soli is able to find work for herself as a nanny and housekeeper for a family in Berkeley, California. Months after arriving in the U.S., Soli gives birth to her son, Ignacio.  It’s of course love at first sight and Soli pours her heart and soul into being the best possible mother to Ignacio and into working harder than ever to ensure that she can make a better life for both herself and for her baby. Unfortunately, Soli ends up in the wrong place at the wrong time and is detained because of her illegal status.  When Soli is detained, Ignacio becomes a ward of the state of California and is put into foster care, where he ends up in the care of Kavya and Rishi.

Against their own better judgment since they know he could be returned to his birth mother at any moment, Kavya and Rishi still fall head over heels for Ignacio. They dote on him as they both learn what it means to be parents and are ultimately very hopeful that they’ll be able to keep him.  The story takes an incredibly gut-wrenching turn at this point because it’s a no-win situation. Of course Soli should get her son back because she’s his birth mother and he’s her world, but then you also see how truly loved and well cared for he is by Kavya and Rishi and your heart breaks for all involved because, realistically, no matter who is awarded custody of Ignacio, someone will end up broken-hearted.

What I loved about Lucky Boy is that the story is written in such a way that there are no “bad guys.”  You truly feel for both of these women and their love for this little boy.  Soli and Kavya are both flawed characters in the sense that they can be naïve, impulsive, and make rash decisions, but ultimately, they are both extremely likeable because they’re both so real and so relatable.  I was of course rooting for Soli as the underdog because the author paints a vivid portrait showing how Soli truly risks her life just trying to make it to the U.S. There were others who traveled with her that died along the way, so she was lucky to even make it to this country in one piece.  I was rooting for her all the way to find a way to stay in the U.S. and raise her son.  On the other hand, I was also rooting for Kavya as well. As likeable as Kavya is throughout the story, she really comes to life as a character once she becomes foster mom to Ignacio. She pours everything she has into being the mom she has dreamed of being for so long, and it’s lovely to see, and so gut-wrenching since you know she could lose Ignacio at any moment.

Okay, now let me walk back the whole ‘there are no bad guys’ argument.  There are no bad guys in terms of our protagonists.  The bad guys in this story are those who enforce the policies on illegal immigrants in this country, specifically, in this case, those in law enforcement and those who run and work in detention centers.  Everything about the system just made me so angry as I was reading.  If this is the way illegal immigrants are really treated when they are detained, it’s shameful.  I don’t care if someone is here illegally or not; it does not justify treating them like they are somehow less than human – separating them from their children, giving them inadequate food, clothing, and shelter, not allowing them proper representation, trying to trick them into signing voluntary deportation papers, and the list goes on and on.  When Soli had a court hearing for Ignacio that she needed to phone in for and no one would let her use the telephone no matter how much she begged and pleaded, I was practically raging.  What kind of monsters would show so little compassion to a woman in danger of losing her child if she can’t make a simple phone call?

I don’t want to say anything else because I don’t want to give the ending, but needless to say, Lucky Boy is a book that will definitely play with your emotions and that, most importantly, make you think about what is going on in the world, and especially in the U.S., right now. It’s a hard read because it’s so gut-wrenching, but it’s also so beautifully written and a powerful read that I would recommend to anyone.

Thanks so much to Goodreads, Shanthi Sekaran, and the publisher for providing me with a copy of this book in exchange for an honest review. It was a wonderful read and I’ll definitely be on the lookout for more writings from this author! 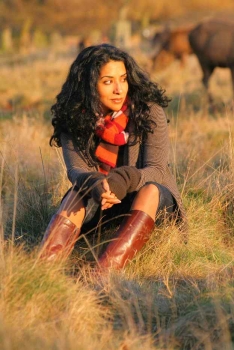