Ruth Emmie Lang was born in Glasgow, Scotland and has the red hair to prove it. When she was four years old, she immigrated to Ohio where she stills lives today. She has since lost her Scottish accent, but still has the hair. Ruth lives with her husband and son on two wooded acres in the Cleveland area. Her first novel, Beasts of Extraordinary Circumstance, was a finalist for the Ohioana Book Award.

The Wilderwomen by Ruth Emmie Lang

The Wilderwomen by Ruth Emmie Lang follows Zadie and Finn, two sisters who possess unique magical gifts.  Zadie is able to see into the future and sense things that are coming, while Finn is able to somehow detect echoes of memories of others who have been wherever she happens to be at the moment.  Somehow, even with these abilities, both sisters are blindsided when their mother, Nora, abruptly leaves their home and disappears.

Fast forward five years and Zadie and Finn have become estranged from one another and there’s still no sign of their mother, that is, until Finn stumbles across a memory echo that she is convinced belongs to her mother.  She reaches out to Zadie and after some coaxing, convinces Zadie that she can retrace their mother’s steps using her memories and finally figure out what happened to her.  The sisters embark on a road trip that will change their lives in more ways than they can possibly imagine.

The relationship between Zadie and Finn was by far the highlight of the book for me.  It’s clear they need each other in spite of having grown so far apart without their mother there for guidance.  And it’s also clear that the absence of their mother and the constant wondering about why she just left them has really kept them from truly moving on and living their lives to the fullest.  I loved watching Zadie and Finn reconnect as they worked together to retrace their mother’s steps.  No matter how far apart they’ve grown, the bond of sisterhood is still there.  Similarly, I also enjoyed the coming of age aspect of the story as we watch each sister grow and figure out their place in the world as they’re on this journey.

Another highlight for me was Lang’s beautiful writing.  It reminded so much of Alice Hoffman’s writing, very lyrical and atmospheric, almost weaving a spell around me as I was reading.  Her descriptions of the girls’ abilities were so vivid that it was easy to picture exactly what the girls were sensing every step of the way.

The only thing that didn’t quite work for me was the ending.  For me it felt a bit rushed and like all of the loose ends were tied up a bit too neatly.  In some ways I was content with how it ended, but in others, not so much.  I found myself with unanswered questions, particularly with respect to the why behind Nora’s disappearance and the why behind the sister’s abilities.  I found myself flipping back through the pages to see if I had missed something.

Even with my issues with the ending, however, I still found The Wilderwomen to be a lovely read overall.  It’s a wonderful story for readers who enjoy stories about family, sisterhood, and magic.  3.5 STARS 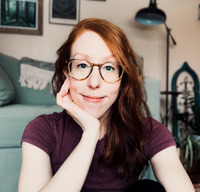 Ruth Emmie Lang was born in Glasgow, Scotland and has the red hair to prove it. When she was four years old, she immigrated to Ohio where she stills lives today. She has since lost her Scottish accent, but still has the hair. Ruth lives with her husband and son on two wooded acres in the Cleveland area. Her first novel, Beasts of Extraordinary Circumstance, was a finalist for the Ohioana Book Award.