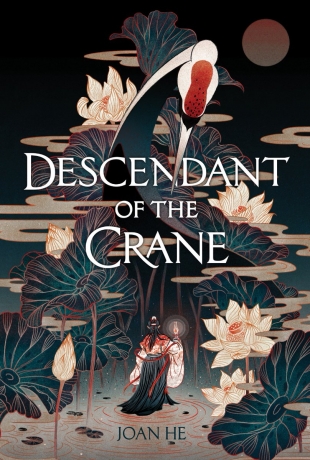 Descendant of the Crane by Joan He


DESCENDANT OF THE CRANE Review

I was initially drawn to Joan He’s debut novel Descendant of the Crane because I heard it described as a Chinese-inspired Game of Thrones.  The promise of a Game of Thrones-style, action-packed epic fantasy set in a Chinese-inspired world just sounded way too good to pass up.  When I dove into the novel, however, I realized that it had a lot more layers to it than I was expecting.  Descendant of the Crane is equal parts epic fantasy, coming of age story, and murder mystery all rolled into one very compelling story.

In the kingdom of Yan, magic has been outlawed for centuries.  Seeking to use it for any purpose is a crime punishable by death.  Joan He grabbed my attention immediately by starting Descendant of the Crane on a most unexpected note, with the protagonist, Princess Hesina of Yan, knowingly committing an act of treason by seeking the counsel of a soothsayer, or fortune teller.  Hesina is willing to risk getting caught, however, because she desperately needs information that only a soothsayer can provide.  Her father, the King, has recently passed away, and Hesina is convinced that foul play was involved.  Hesina knows that while the soothsayer cannot see the past and provide her with the killer’s name, the soothsayer does have the power to see into the future and can thus point her on the path to bring her father’s killer to justice.

I admired Hesina right away, for her determination and bravery, and for her devotion to her father.  What I liked most about Hesina though is how much growth she undergoes throughout the story.  She determines that sitting on the throne will provide her the best opportunity to bring her father’s killer to justice, so she convinces her mother to let her go ahead and ascend to the throne to rule as Queen of Yan.  Descendant of the Crane is a coming of age story in the sense that Hesina really has to grow into the role of Queen and learns many tough lessons along the way.  When she first takes on the role, her main goal is just to avenge her father’s murder, but the longer she rules, however, the more she realizes her kingdom is unstable and fueled by its hatred of the soothsayers and their magic.  She becomes determined that it’s time to wipe out this hatred so that the soothsayers can just live in peace.  Undoing centuries’ worth of hatred is a tall order though, and Hesina quickly learns it’s not easy being Queen and that her decisions and actions sometimes have unintended consequences.

In addition to Hesina’s journey to figure out what kind of ruler she wants to be, Descendant of the Crane is also filled with plenty of political intrigue to keep the plot moving along.  Hesina quickly realizes that there are many potential suspects as to who killer her father.  Many within the palace have much to gain from the King’s death that Hesina is convinced it’s an inside job.  It makes her really examine each of those around her, looking for potential motives and whether or not they would have had easy access to the King.  And once there are actual suspects, there’s even some courtroom drama to mix things up a bit.  It reminded me of an epic fantasy version of Law and Order, which I thought was quite unique and very entertaining, especially since Hesina’s legal representative, in another unexpected twist, was a sexy ex-criminal named Akira.

While the pacing for the novel wasn’t the fastest, it still worked well for this story.  It’s kind of a slow burn to find out what really happened to the King, but there are so many twists and turns along the way that it really effectively keeps the suspense building. There were a couple of jaw dropping twists, in particular, near the end that have left me anxiously awaiting the next book in the series.

I think my favorite part of the story is the way the author has crafted her characters.  There are lots of complicated characters and relationships, and who’s good and who’s bad, isn’t always obvious.  Morally gray characters abound, which always makes for a great read for me.  There’s also some interesting sibling dynamics within Hesina’s own family that I very much enjoyed reading about.

Overall, I was very impressed with Joan He’s debut.  Equal parts epic fantasy, murder mystery, and coming of age story, Descendant of the Crane has a little something for everyone.

Princess Hesina of Yan has always been eager to shirk the responsibilities of the crown, dreaming of an unremarkable life. But when her beloved father is found dead, she’s thrust into power, suddenly the queen of a surprisingly unstable kingdom. What’s more, Hesina believes that her father was murdered—and that the killer is someone close to her.

Hesina’s court is packed full of dissemblers and deceivers eager to use the king’s death for political gain, each as plausibly guilty as the next. Her advisers would like her to blame the neighboring kingdom of Kendi’a, whose ruler has been mustering for war. Determined to find her father’s actual killer, Hesina does something desperate: she enlists the aid of a soothsayer—a treasonous act, punishable by death, since magic was outlawed centuries ago.

Using the information provided by the sooth, and uncertain if she can trust her family, Hesina turns to Akira—a brilliant investigator who’s also a convicted criminal with secrets of his own. With the future of Yan at stake, can Hesina find justice for her father? Or will the cost be too high?