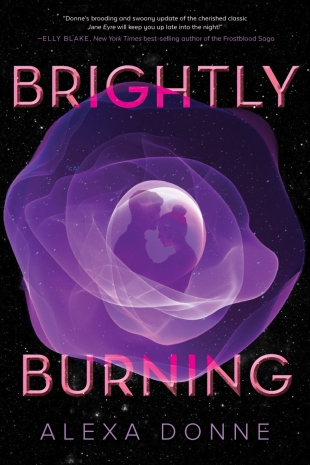 When I was in high school, I fell in love with Jane Eyre when I read it.  I just couldn’t resist the tale of a plain young woman from a humble background who falls in love with the wealthy but dark and brooding Mr. Rochester.  The Gothic setting, the secrets and the lies, but underneath it all, an attraction that they just can’t fight – all of it was just so perfect.

Needless to say, when I heard a retelling of Jane Eyre was coming out and that it was set in space (!), I rushed over to Netgalley to request it and was so ecstatic when I was approved.

I dove in and was immediately impressed by what a unique storyline author Alexa Donne had crafted, while at the same time, retaining so many elements from the classic novel.  Donne’s story is actually set in the future where a second Ice Age has made the Earth uninhabitable forcing those from Earth to live aboard a fleet of spaceships.  When the story opens, they have been living aboard these ships for a couple hundred years and some of the aging ships are starting to show signs that they cannot remain in space for much longer.  Resources are becoming scarce, especially aboard the poorer ships and residents know there will come a time when they are forced to return to Earth.  All they can do is hope that the Earth has thawed enough so that they have a chance to survive.

Our Jane Eyre character, seventeen year old Stella Ainsley, is aboard such an aging ship.  Stella works as both a teacher and a part-time engineer on the ship so she knows firsthand how poor their prospects are for remaining in space much longer.  She also knows that her only chance of not being sent to Earth is to secure employment on another ship but jobs are as scarce as resources are so her options are few and far between.  That is, until a privately owned ship called The Rochester, offers her employment as a governess.  Ecstatic at her good luck, Stella accepts the job immediately and leaves for The Rochester.

Stella gets a lot more than she bargained for, however, once she is aboard The Rochester, including handsome 19-year old Hugo Fairfax, who unexpectedly is the Captain of the ship and now Stella’s boss, as Stella will be teaching his younger sister, Jessa..  Although Hugo has a reputation for being moody and a drunk, Stella finds him to be charming and kind, at least around her.  She finds herself immediately attracted to him but becomes weary when she realizes that he is keeping secrets from her.  She has heard rumors that The Rochester is haunted and when strange things start happening aboard the ship, Stella becomes determined to get to the bottom of the mystery. What Stella doesn’t bargain on, however, is that trying to find the answer to one mystery leads her down an even more dangerous path, one that she may not be able to escape from…

Stella.  I really liked Stella right away.  Just like the original Jane Eyre character, Stella is smart, plain, and very outspoken.  She’s also an orphan who happens to be great with kids.  One of my favorite qualities about her is that while she remains respectful at all times, she doesn’t just stand there and let people insult her because they think they’re better than she is.  I’ve said it before and I’ll say it again – I am a sucker for a scrappy underdog and Stella fits the bill. When Stella goes head-to-head with a wealthy young woman named Bianca who perceives Stella as a threat for Hugo’s affections and goes out of her way to belittle Stella in front of Hugo, I was cheering Stella on every step of the way. Aside from her outspokenness, I also admired Stella’s sense of self-sacrifice.  She has a very strong moral compass and will sacrifice herself at any moment to save the lives of others.  It was an impressive quality to see in someone so young.

Hugo.  My love for Hugo stems from my love for complicated characters and they don’t get much more complicated than Hugo Fairfax.  One moment he’s fun, flirty, and charming, and being the best big brother Jessa could ever wish for, but then the next moment, he’s broody, secretive, and constantly drinking.  It’s clear that he’s hiding something.  It’s just not clear what that something is, or whether anyone else on his crew knows what it is either.  I loved that his character had all of these layers, and like Stella, I wanted to get through all of them and figure out who the real Hugo is.

Romance.  I really liked that Donne crafted a romance between Stella and Hugo that was very reminiscent of what we got with Jane and Mr. Rochester in the original tale.  The chemistry between Stella and Hugo is believable and I liked that even though the attraction was almost immediate, the relationship itself still takes time to develop and is fraught with obstacles, including not only Bianca but also whatever Hugo is hiding from Stella regarding the happenings aboard The Rochester.

Secrets, Mysteries, and Danger.  Even though the setting is in space, the story still has a Gothic feel to it because of all of the secrets that seem to be lurking in the shadows aboard The Rochester.  As Stella begins to investigate, the suspense and tension really starts to ratchet up and I found myself getting more and more into the story because I wanted to know what was really going on aboard the ship once it became clear it was not just Stella’s imagination getting the better of her.

Made Up Words.  This will probably be one of those things that bothers me but no one else, but it was driving me crazy that the characters in Brightly Burning kept using the word FREX as a curse.   I mean, seriously – Set in the future or not, most of the characters we encounter on the ships are descended from Americans and even if they aren’t, the ‘F’ word they are clearly trying to use is universal enough that it made no sense to me how they got from the familiar ‘F’ word to frex.  Frex this, frex that, frexxing etc.  Like I said, it’s probably just me but I just cringed every time the word came up.

Rushed Ending.  I don’t want to say that the pacing was slow throughout the rest of the novel because it wasn’t, but it felt like we really kicked it into high gear as the end drew near.  I’m being vague here because I don’t want to spoil the ending, so I’ll just say that it felt like a few important details were just glossed over in favor of wrapping things up quickly.  For that reason, while I did love the ending overall, I just would have liked a little more from it.

Brightly Burning is a fun and unique retelling of the classic novel, Jane Eyre.  The author does a remarkable job of updating the story to a believable and entertaining science fiction tale set in space, while retaining all of the memorable details from the original novel.  I think Brightly Burning would appeal to readers, even if they’ve never read Jane Eyre, as long as they enjoy science fiction with a side of swoony romance, dark secrets, and even a conspiracy or two.

Seventeen-year-old Stella Ainsley wants just one thing: to go somewhere—anywhere—else. Her home is a floundering spaceship that offers few prospects, having been orbiting an ice-encased Earth for two hundred years. When a private ship hires her as a governess, Stella jumps at the chance. The captain of the Rochester, nineteen-year-old Hugo Fairfax, is notorious throughout the fleet for being a moody recluse and a drunk. But with Stella he’s kind.

But the Rochester harbors secrets: Stella is certain someone is trying to kill Hugo, and the more she discovers, the more questions she has about his role in a conspiracy threatening the fleet. 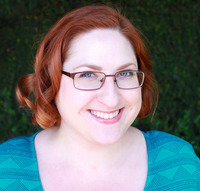