My “Waiting On” Wednesday selection for this week is Empress of a Thousand Skies by Rhoda Belleza.  I’m excited for this book but it just sounds like it’s going to be such a wild ride.  I was also drawn to it because some of the advance reviews say that it’s perfect for fans of The Lunar Chronicles by Marissa Meyer.  I’m reading those now and just love them so definitely want to give Empress of a Thousand Skies a chance if it’s anything like The Lunar Chronicles.

Empress of a Thousand Skies 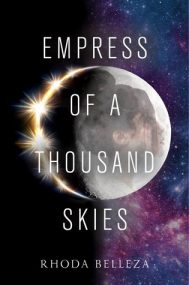 For fans of Pierce Brown and Firefly comes an epic sci-fi fantasy that Kiersten White, author of And I Darken, calls “dazzling–an adventure as sweeping in scope as the galaxies it spans!”

Empress:  Rhee, also known as Crown Princess Rhiannon Ta’an, is the sole surviving heir to a powerful dynasty. She’ll stop at nothing to avenge her family and claim her throne.

Fugitive:  Aly has risen above his war refugee origins to find fame as the dashing star of a DroneVision show. But when he’s falsely accused of killing Rhee, he’s forced to prove his innocence to save his reputation – and his life.

Madman:  With planets on the brink of war, Rhee and Aly are thrown together to confront a ruthless evil that threatens the fate of the entire galaxy.

Rhoda Belleza crafts a powerful saga of vengeance, warfare, and the true meaning of legacy in this exhilarating debut, perfect for readers of Marissa Meyer’s Lunar Chronicles and Jay Kristoff and Amie Kaufman’s Illuminae Files.

Check out this Advance Praise for Empress of a Thousand Skies!

“This is a multiplanet, multiculture, multitech world and a timely tale. An exceptionally satisfying series opener.” —Kirkus Reviews, Starred Review

“Fans of calculating political maneuvering and expansive, interplanetary plots will find much to enjoy in Belleza’s Firefly-esque debut.” —Publishers Weekly

“Belleza’s debut is dazzling–an adventure as sweeping in scope as the galaxies it spans!”  —Kiersten White, New York Times bestselling author of And I Darken

“An epic space opera with all the elements of an addictive read–danger, deception, unlikely allies, and the fate of worlds hanging in the balance. A stunning debut.” —Kami Garcia, #1 New York Times bestselling coauthor of Beautiful Creatures & author of The Lovely Reckless

“This book glitters like stars. With a heart-pounding plot, twisty secrets, and characters you can’t help but root for, Empress of a Thousand Skies had me turning pages well into the night!”  —Beth Revis, New York Times bestselling author of the Across the Universe series

Book Review: Ever the Hunted by Erin Summerill
Scroll to top