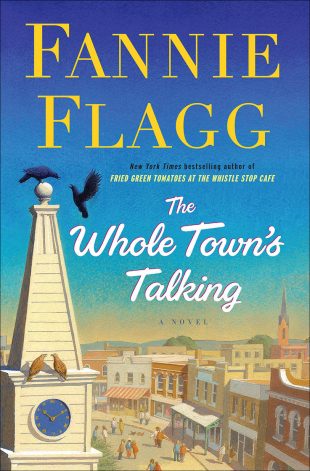 Goodreads Synopsis:  From the beloved author of Fried Green Tomatoes at the Whistle Stop Cafe comes another unforgettable, laugh-out-loud, and moving novel about what it means to be truly alive.

Elmwood Springs, Missouri, is a small town like any other, but something strange is happening out at the cemetery. “Still Meadows,” as it’s called, is anything but still. Funny and profound, this novel in the tradition of Flagg’s Can’t Wait to Get to Heaven and Thornton Wilder’s Our Town deals with universal themes of heaven and earth and everything in between, as Flagg tells a surprising story of life, afterlife, and the mysterious goings-on of ordinary people.

What a wonderful read this was! I’ve read so many books with dark and dystopian themes this year that it feels good to close out the year with such a lighthearted and humorous look at life, death, and everything in between.  In a way that only she can, the legendary Fannie Flagg takes us on a historical journey that chronicles the birth and evolution of the small town of Elmwood Springs, Missouri.

It’s hard to discuss the plot without giving too much away so I’ll be brief, but the primary storyline follows Elmwood Springs and its residents over the course of approximately 100 years.  The story begins in the late 1880s as we watch Swedish immigrant Lordor Nordstrom build the little town from the ground up with the help of his fellow immigrants.  Because they understand that they’re all in this together, these founders work together and lovingly cultivate their town into a thriving and wonderful community.  Once the founders’ initial work is done, we then follow the town and its residents for decades and see important historic and political events, technological discoveries, and much, much more through their eyes.  Some highlights include the Women’s Suffrage Movement, the flight of the first airplane, the Great Depression, World War II, the first landing on the moon, and of course, all of the TV and pop culture icons from each decade.

I also won’t get into the strange happenings out at the Still Meadows cemetery mentioned in the book’s blurb aside from to say that Fannie Flagg will definitely give you food for thought about what happens when you die.  While what goes on at the cemetery may pay homage to Thornton Wilder’s Our Town, it’s definitely got that charmingly quirky twist that only Fannie Flagg can give it.

What I Loved about The Whole Town’s Talking

The Characters:  Fannie Flagg is a master when it comes to creating realistic and endearing characters and she does just that in The Whole Town’s Talking.  Aside from the founders, it’s actually hard to really state who the main characters are, but they’re all just such an endearing group of folks.  Since everyone I know has been binge watching the Gilmore Girls reunion, think of the residents of Stars Hollow and that’s the kind of wonderful assortment of well-rounded characters you’re dealing with in Elmwood Springs.

Some, like Elner, the crazy cat-loving lady who has a chance encounter with the infamous Bonnie and Clyde, are just oozing with personality and will keep you laughing out loud, while others like the hardworking Lordor Nordstrom will just grab your heart and won’t let go.  I fell hard for Lordor in those early pages as he first meets Katrina, the woman he falls in love with.  He’s so charmingly awkward that all of the women townsfolk come to his aid to help him woo Katrina.  It’s just so sweet, but yet not too sweet, because I found myself chuckling at all of their antics throughout those early days.

The Book’s Tone:  I know I keep referring to it as light, sweet, charming, heartwarming, which it totally is, but what I also liked about it was that it wasn’t so saccharine as to be off-putting.  There was such an infusion of classic Fannie Flagg humor that I constantly found myself chuckling a bit, even at what could be considered the sweetest moments of the story.  In that sense, it’s quite well balanced.

The Suspense:  Yes, even in a novel that I’m describing as lighthearted and humorous, there’s a bit of suspense built into the story.  Now I’m not talking suspense in the sense of a thriller. If you’re looking for that kind of suspense, you’ll definitely want to look elsewhere.  No, what I’m talking about are the highs and the lows and the curveballs that life throws at all at the residents of Elmwood Springs.  It’s that kind of realistic suspense we can all relate to because we all experience the same types of highs and lows – it’s just part of being alive.

And then, of course, there are the mysterious happenings down at the cemetery…

Anything I didn’t care for?

The only complaint I really had with the novel was that I would have liked a more in depth look at some of the characters and their lives.  The characters, for the most part, are just so lovable and quirky, that I couldn’t help but want to know a little more about them.  That’s just personal preference with me though because I always want to know as much as possible about characters that I love to further my connection to them.  I don’t think that lack of depth in any way detracts from the overall quality of the storytelling though since its focus is the whole town rather than just a few select characters anyway.

Who Would I Recommend The Whole Town’s Talking to?

I would definitely recommend The Whole Town’s Talking to anyone who already loves Fannie Flagg’s novels.  If you loved Welcome to the World, Baby Girl or Fried Green Tomatoes at the Whistle Stop Café, then Fannie’s latest work will be right up your alley.

I would also recommend it to anyone else who likes a light-hearted and humorous read that also makes you think about your life and all of the people in it.

Question:  Have you ever read any of Fannie Flagg’s novels? 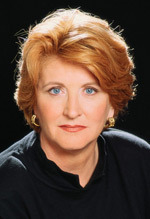 Fannie Flagg’s career started in the fifth grade when she wrote, directed, and starred in her first play entitled The Whoopee Girls, and she has not stopped since. At age nineteen she began writing and producing television specials, and later wrote and appeared on Candid Camera. She then went on to distinguish herself as an actress and a writer in television, films, and the theater. She is the New York Times bestselling author of Daisy Fay and the Miracle Man; Fried Green Tomatoes at the Whistle Stop Cafe; Welcome to the World, Baby Girl!; Standing in the Rainbow; A Redbird Christmas; and Can’t Wait to Get to Heaven. Flagg’s script for the movie Fried Green Tomatoes was nominated for an Academy Award, and the Writers Guild of America Award and won the highly regarded Scripter Award for best screenplay of the year. Flagg lives happily in California and Alabama.

Waiting on Wednesday – Spotlight on The Names They Gave Us by Emery L...