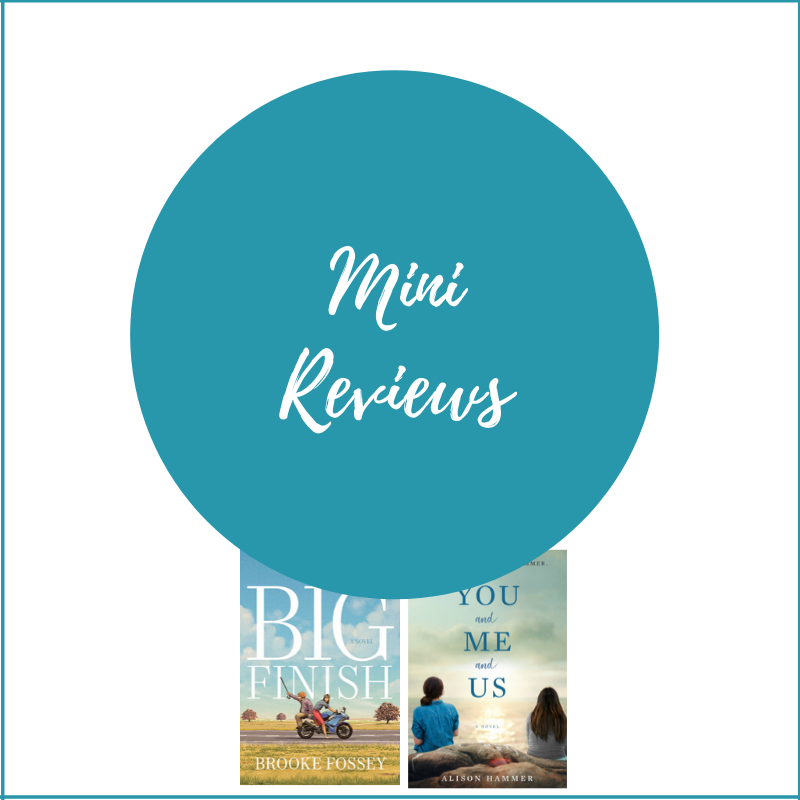 Today I’m sharing reviews of some new and recent releases that are sure to please anyone who enjoys emotional reads.  The Big Finish is a heartwarming and fun read that put a smile on my face, while You and Me and Us had me reaching for my tissues and doing the ugly cry.

Brooke Fossey’s debut novel The Big Finish is an absolutely delightful story that follows a lovable cast of characters at an assisted living facility and the young woman who shows up unexpectedly and turns all of their lives upside down in the best way possible.  I’ll confess right now that I requested this book because I fell in love with the adorable cover as soon as I saw it.  I couldn’t resist the elderly man sitting on the back of the motorcycle waving his cane in the air.  That’s the promise of a hilarious read right there and thankfully I was not disappointed.

I got so much more than a humorous read though.  The Big Finish is a heartwarming story about family, friendship, love and loss. It centers around longtime roommates, Carl and Duffy.  Duffy is a bit of a curmudgeon, while Carl is a total sweetheart.  Even though they’re polar opposites, their friendship and living arrangements work seamlessly.  That is, until Josie, the granddaughter Carl has never met, comes climbing in their bedroom window in the middle of the night one night, with nothing but the clothes on her back, alcohol on her breath, and a black eye.  It’s clear Josie is in trouble and Duffy wants no part of it.  If she creates drama for them, their nasty landlord will surely give them a one-way ticket to the nearest nursing home and that is not how Duffy wants to live out his final days.  Duffy’s friendship with Carl means everything to him though so he reluctantly agrees to do whatever he can to help Carl get to know his granddaughter and to help her out of whatever toxic situation she is running from.  What starts out as a mission on the down-low soon draws in more and more of the home’s residents as they fall in love with Josie and want to help her.

I don’t want to say anything more about the plot because you just have to experience it for yourself, but I promise this is a cast of characters you will fall in love with, especially Duffy, who is nowhere near as grumpy and gruff as he would have you believe.  Duffy and Carl’s friendship is what really made the book such a special read for me and I also adored Duffy’s friendship with another resident, Alice.  He would clearly love for their relationship to be more than just friends and every scene with her brings out his softer side.  The Big Finish is one of those books I’d love to see made into a movie and was practically casting it in my mind the whole time I was reading it (with the cast of Grace and Frankie actually, haha).

If you’re looking for a fun and heartwarming read about friendship and the things we’re willing to do for our loved ones, you should definitely check out The Big Finish. 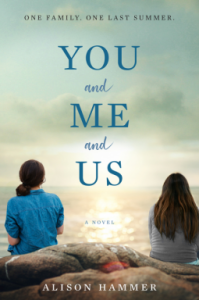 You and Me and Us Goodreads

Alison Hammer’s new novel You and Me and Us is the heartbreaking story of what happens to a family when a diagnosis of terminal cancer turns their lives upside down.  Alexis and her teen daughter, CeCe, haven’t been close in years.  The ad agency Alexis founded keeps her so busy that she’s rarely ever around and has missed many of her daughter’s important milestones.  While Alexis and CeCe aren’t close, the opposite is true for CeCe and her dad, Tommy.  Tommy is CeCe’s rock and has been there for everything her mom has missed and then some.  Tommy is devoted to both Alexis and CeCe, and neither of them know what they would do without him.  When Tommy, who has been nursing a nagging cough for months, finally confesses to his girls that he has cancer and only has a few months to live, they are understandably devastated but are determined to make the most of every moment they have left with him.

Oh my gosh, guys, this book is such an emotional journey!  I loved that the author presents the story to us from the perspectives of both CeCe and Alexis.  I thought it gave a very full picture of what each of them was feeling at every step along the way – the sadness, the anger and frustration at the situation, CeCe’s resentment of her mother, Alexis’ sorrow at having missed out on so much of her daughter’s life (and Tommy’s for that matter).  The author also beautifully captured how fearful both Alexis and CeCe were of what life was going to be like once Tommy was gone.  Would Alexis finally make CeCe a priority?  Would CeCe actually let her mom back into her life?  I felt like the range of emotions they were experiencing were portrayed very realistically, which made the story all the more heartbreaking and engrossing.

As sad as the story is, it also has some beautiful and uplifting moments that really help to balance and round out the story.  I really did love watching Tommy interact with both CeCe and Alexis. He’s just such a wonderful guy and his bond with each of them was so special.  I also loved the secondary cast of characters – friends who are there for both CeCe and Alexis as they get closer and closer to the end of Tommy’s life.  I was also a huge fan of the ending, which although it had me in tears, it also left me with a smile on my face and hope in my heart. If books that pack an emotional punch are your thing, I highly recommend You and Me and Us.  4.5 STARS