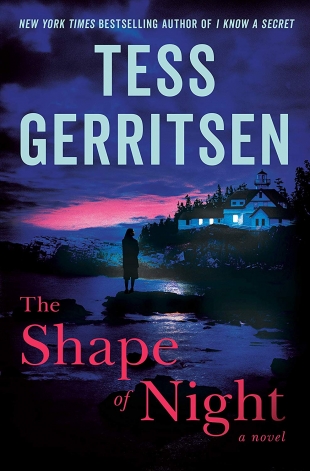 The Shape of Night by Tess Gerritsen

THE SHAPE OF NIGHT Review

I’ve been a fan of Tess Gerritsen’s novels for years, especially her Rizzoli and Isles thriller series, so when I saw she had a new novel coming out, The Shape of Night, I couldn’t wait to get my hands on a copy.

The Shape of Night is set in a remote coastal town in Maine where the protagonist, food writer Ava Collette, has rented a house, in hopes of escaping her troubles so that she can focus on finishing her latest cookbook, which is way overdue to her publishers.  The home, Brodie’s Watch, is named after its original owner Captain Jeremiah Brodie, who died at sea over 150 years ago. When Ava firsts arrives at Brodie’s Watch, the outside does not look at all like the quiet, peaceful spot she was hoping for.  Instead, it actually looks quite menacing and unwelcoming.  Once inside, however, it’s exactly what Ava was hoping for and so she settles in quickly, feeling at peace with the place.

That is, until she starts feeling like she’s being watched.  And not only that, she also starts hearing strange noises and seeing things at night that have her questioning her own sanity.  When she also starts to find random personal items that clearly belonged to the prior tenant, Ava contacts her realtor to see about forwarding the items to the prior tenant and to try to get some answers about the house.  The realtor gives her the runaround at first but then finally admits that the prior tenant left very abruptly and without explanation. Unsatisfied with the answers she is given, Ava starts to do some digging to learn as much as she can about the house and its prior owners.  What she finds regarding the prior owners is not only incredibly disturbing, but it could actually end up costing Ava her life.

While The Shape of Night is quite different from those Rizzoli and Isles novels I love so much because it features a paranormal element, it still kept me on the edge of my seat with the riveting mystery of what is going on at Brodie’s Watch.  I was very engrossed in the mystery of the house and whether or not it was actually haunted, and so found Ava’s investigation very entertaining.  I was also very invested in the character of Ava and wanted to know more about what had happened in her personal life to have her fleeing to such a remote location and avoiding phone calls from her friends and family.

I also loved the creepy, atmospheric, almost Gothic feel that Brodie’s Watch has at night and all of the supernatural touches that Gerritsen has added.  Ava’s paranoia about what she was experiencing was also quite contagious and had me looking over my own shoulder to make sure no one was watching me!

If you’re into mysteries and/or paranormal stories, Tess Gerritsen’s The Shape of Night may be exactly the book you’re looking for.  It’s a perfect read for fall!

A woman trying to outrun her past is drawn to a quiet coastal town in Maine–and to a string of unsolved murders–in this haunting tale of romantic suspense from New York Times bestselling author Tess Gerritsen.

Ava Collette is punishing herself for an unspeakable tragedy. So she flees Boston and rents an old home named Brodie’s Watch on a remote coastal peninsula of Maine, hoping to work on a cookbook inspired by New England cuisine that she’s been trying to finish for months. She immediately feels at peace in the isolated house–until she starts to hear strange noises.

Rumor has it that a sea captain named Brodie has haunted the house for decades. Then, one night, Ava is awakened to find herself face to face with an apparition who looks–and feels–all too real. Meanwhile, there’s been a series of accidental deaths nearby that don’t add up. And as Ava starts to check into the previous renter’s mysterious disappearance, she starts to realize that there’s a disturbing secret some in town are desperate to keep hidden.

Soon all of Ava’s waking hours are consumed by her investigation, and her nights are ignited by Captain Brodie’s ghostly visits. But even as she questions her own sanity, she knows she must uncover the truth before a killer strikes again.

Internationally bestselling author Tess Gerritsen took an unusual route to a writing career. A graduate of Stanford University, Tess went on to medical school at the University of California, San Francisco, where she was awarded her M.D.

While on maternity leave from her work as a physician, she began to write fiction. In 1987, her first novel was published. Call After Midnight, a romantic thriller, was followed by eight more romantic suspense novels. She also wrote a screenplay, “Adrift”, which aired as a 1993 CBS Movie of the Week starring Kate Jackson.

As well as being a New York Times bestselling author, she has also been a #1 bestseller in both Germany and the UK. She has won both the Nero Wolfe Award (for Vanish) and the Rita Award (for The Surgeon.) Critics around the world have praised her novels as “Pulse-pounding fun” (Philadelphia Inquirer), “Scary and brilliant” (Toronto Globe and Mail), and “Polished, riveting prose” (Chicago Tribune). Publisher Weekly has dubbed her the “medical suspense queen”.

Now retired from medicine, she writes full time. She lives in Maine.