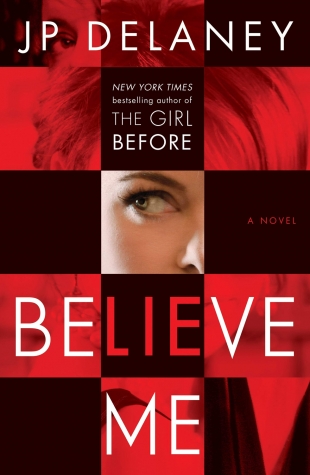 Believe Me by J.P. Delaney, Tony Strong
Also by this author: The Girl Before, The Perfect Wife

J.P. Delaney is back with another riveting psychological thriller that is sure to keep you on the edge of your seat.  Believe Me follows Claire Wright, a young British woman living in America who aspires to be an actor.  When we meet Claire, she is struggling financially.  She doesn’t have a green card which makes it difficult to find legitimate employment.  She ends up working on the sly for a team of divorce lawyers, where she uses her acting talents to entrap cheating husbands and obtain video evidence for their wives.

Everything changes in Claire’s life, however, when one of the wives she is trying to obtain evidence of cheating for turns up dead.  Believing that the woman’s husband is the murderer and that his wife might not be his only target, law enforcement officers approach Claire about using her talents to try to lure the husband into a confession.  With the promise of a green card and a lot of cash dangled in front of her, Claire agrees.

Claire is a brilliant actor, but will she be able to help law enforcement catch the killer or will she end up in over her head?  All I can say is buckle up and prepare for a wild ride!

Believe Me is one of those novels that I feel like I can’t say much about because I don’t want to give anything away, so I’m just going to mention a couple of quick highlights that I really enjoyed.

It probably seems weird to start off talking about the structure of a novel, but I have to admit this was my favorite part about Believe Me.  The main character Claire, who as I’ve mentioned is an aspiring actor, often goes through life imaging incidents in her life as if they are scenes from a script.  Since we are watching the events of the story unfold from Claire’s perspective, Delaney actually weaves together a tale that is mostly straight narrative, but which occasionally has little bits of script incorporated in as well to mimic how Claire imagines certain scenes playing out, complete with stage directions and dialogue she has scripted out in her head.  At first, I worried that the script bits might seem a little gimmicky, but in the end, they really worked well for me.

Aside from the unique structure, I also enjoyed that the plot was filled with suspenseful twists and turns that kept me guessing from start to finish.  The twists were such that it oftentimes made it hard to distinguish between what was real and what was fake in terms of Claire’s role in the murder investigation as well as what exactly was going on with the husband.  I tried to predict what direction the story was taking a few times along the way but was so wrong each time that I finally decided to just settle in and enjoy the wild ride Delaney was taking me on.  The fact that his writing flows so smoothly makes it easy to do that and just trust that the ride is going to be worth it in the end.

The main issue I had with Believe Me was that I just never really felt a connection to Claire.  Because she played so many different roles throughout the course of the novel, I never felt like I knew who the real Claire was.  Whenever she said something about herself, I took it with a grain of salt because I was never convinced she was being honest.  While that kind of personality was helpful in terms of maintaining the novel’s premise of not knowing what was real and what was fake, it left me feeling very detached from Claire.  Even when she was potentially in danger, I found that I didn’t really care.  I wanted to know what was going to happen, of course, but it wasn’t a case where I was worried for her well being at all.  If I had been able to better connect with Claire, this would have easily been a 4 star read for me.

There’s so much more I would love to say about Believe Me, but because I don’t want to spoil the mystery, I’m just going to say that I’d highly recommend this book to anyone who enjoys riveting psychological thrillers and to fans of Delaney’s last book, The Girl Before.  If you enjoyed that one, I think you would also enjoy Believe Me.

In this twisty psychological thriller from the New York Times bestselling author of The Girl Before, an actress plays both sides of a murder investigation.

A struggling actor, a Brit in America without a green card, Claire needs work and money to survive. Then she gets both. But nothing like she expected.

Claire agrees to become a decoy for a firm of divorce lawyers. Hired to entrap straying husbands, she must catch them on tape with their seductive propositions. The rules? Never hit on the mark directly. Make it clear you’re available, but he has to proposition you, not the other way around. The firm is after evidence, not coercion. The innocent have nothing to hide.

Then the game changes.

When the wife of one of Claire’s targets is violently murdered, the cops are sure the husband is to blame. Desperate to catch him before he kills again, they enlist Claire to lure him into a confession.

Claire can do this. She’s brilliant at assuming a voice and an identity. For a woman who’s mastered the art of manipulation, how difficult could it be to tempt a killer into a trap? But who is the decoy…and who is the prey?