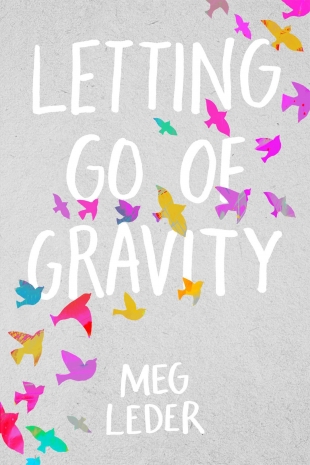 Meg Leder’s Letting Go of Gravity is a beautiful, emotionally engaging story about a young woman named Parker and her twin brother, Charlie.  When the novel opens, Parker, as Class Valedictorian, is giving a speech at her graduation.  Parker has been wildly successful in her academic life – making straight As, achieving perfect scores on her SATs, getting accepted to Harvard where she plans to study to become a doctor, and landing herself a spot at a very competitive internship at the local children’s hospital.  Charlie, on the other hand, even though he’s Parker’s twin, is not graduating.  Instead, he is being held back because he missed too much time from school.  Why?  Because Charlie has been battling cancer.  He was diagnosed with it for the first time when he was in fourth grade, went into remission, only to have it return the summer before his senior year.

Parker is obsessed with making sure her twin is safe.  She watches over him like a hawk, reporting back to her parents anytime she fears Charlie might be doing something that will cause another relapse.  While Charlie understands where his sister is coming from, ultimately he can’t stand being around her because she makes him feel like he’s a caged animal with no freedom to do anything he wants to do.  Needless to say, their relationship is quite strained and Parker begins to wonder if things will ever be normal between them again…

I really loved Parker.  I thought she was just such a sweetheart and even though it drives Charlie crazy, I loved how devoted Parker is to him.  I have a sister, and she’s not even a twin, but I feel that level of fierce protectiveness for her that Parker has for Charlie.  Parker has devoted most of her life to watching over Charlie, so much so that he’s actually the main reason she’s planning to study pre-med at Harvard.  She wants to be a pediatric oncologist, specifically because of what has happened to Charlie.  Her parents are giddy about her decision, with her dad already starting to call her Dr. McCullough.  Parker, however, has been experiencing anxiety every time she thinks about going to Harvard in the fall, and when she arrives at the hospital to begin her internship, she has a full on panic attack and has to leave.  At this moment, Parker begins to seriously question if this is what she really wants.

The story is told from Parker’s perspective and this was fantastic too because the author does an incredible job of portraying all of the conflicting emotions that were at war in Parker’s head.  While Charlie may feel like a caged animal because everyone watches him like a hawk, Parker starts to feel equally caged in by her fears – fear of failure, fear of disappointing her loved ones, and of course, fear of losing her loved ones.  Being inside of Parker’s head was kind of a messy place to be because she has so much going on in there, but everything she’s thinking, feeling, and fearing just felt so realistic.

The relationships in Letting Go of Gravity were beautifully written as well. The very complex and strained sibling relationship between Parker and Charlie was my favorite, but I also loved the friendships.  Parker has three incredible friends, Finn, Em and Ruby, and they are as devoted to Parker as Parker is to Charlie.  Their support is unwavering but they are also all there to give Parker a kick in the pants when she really needs it.  There are also a couple of potential romances that come out of these friendships, but the author does a wonderful job of weaving those in gently so that they don’t get in the way of what I would say is more of a coming of age story than anything else as these friends give Parker the love and support she needs to figure out who she is and what she really wants out of life.

Lastly, this story is just packed with moving, relatable, and relevant themes, which is something that always makes a contemporary novel appealing to me.  This novel tackles how cancer and other serious illnesses impact, not just the patient, but also the entire family – the fear that comes when faced with the possibility of losing someone you love, the sacrifices you’re willing to make to do everything in your power to keep that from happening, and so on.  Letting Go of Gravity also explores anxiety and the pressure of putting too much on yourself, especially if you’re doing it for the wrong reasons, but really, even if you think you’re doing it for the right reasons.  As the title implies, sometimes you just have to let go of what is weighing you down.

The only real issue I had with Letting Go of Gravity was that I found some of it to be a little too predictable.  I don’t want to say too much because I don’t want to spoil anything for other readers, but I guessed almost immediately how things were going to go for Parker.  I can’t say that it really lessened my enjoyment of the overall story, but I always prefer it when plot twists actually surprise me.

Letting Go of Gravity is a beautiful and moving book.  I wouldn’t hesitate to recommend it to fans of John Green, Jennifer Niven, and Brigid Kemmerer.  If you like emotional books that feature sibling relationships and great friendships, and that might make you shed a tear or two, give Letting Go of Gravity a try.

Twins Parker and Charlie are polar opposites.  Where Charlie is fearless, Parker is careful.  Charlie is confident while Parker aims to please.  Charlie is outgoing and outspoken; Parker is introverted and reserved.  And of course, there’s the one other major difference: Charlie got leukemia. Parker didn’t.

But now that Charlie is officially in remission, life couldn’t be going better for Parker. She’s landed a prestigious summer internship at the hospital and is headed to Harvard in the fall to study pediatric oncology—which is why the anxiety she’s felt since her Harvard acceptance is so unsettling. And it doesn’t help that her relationship with Charlie has been on the rocks since his diagnosis.

Enter Finn, a boy who’s been leaving strange graffiti messages all over town. Parker can’t stop thinking about those messages, or about Finn, who makes her feel free for the first time: free to doubt, free to make mistakes, and free to confront the truth that Parker has been hiding from for a long time.

That she keeps trying to save Charlie, when the person who really needs saving is herself.