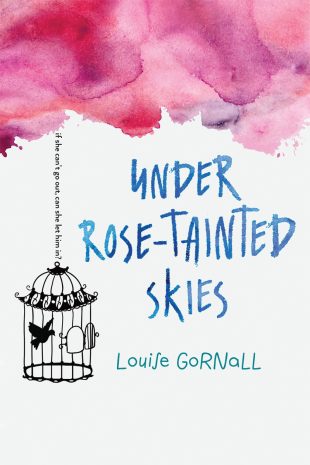 
Goodreads Synopsis:  At seventeen, Norah has accepted that the four walls of her house delineate her life. She knows that fearing everything from inland tsunamis to odd numbers is irrational, but her mind insists the world outside is too big, too dangerous. So she stays safe inside, watching others’ lives through her windows and social media feed.

But when Luke arrives on her doorstep, he doesn’t see a girl defined by medical terms and mental health. Instead, he sees a girl who is funny, smart, and brave. And Norah likes what he sees.

Their friendship turns deeper, but Norah knows Luke deserves a normal girl. One who can walk beneath the open sky. One who is unafraid of kissing. One who isn’t so screwed up. Can she let him go for his own good—or can Norah learn to see herself through Luke’s eyes?

Louise Gornall’s Under Rose-Tainted Skies is a contemporary young adult novel that focuses on what it’s like to live with a mental illness.  The novel follows protagonist, seventeen year old Norah Dean, and the day-to-day challenges she faces because she has agoraphobia and OCD.  Up until about four years ago, Norah was living the life of a typical teen – going to school, hanging out with her friends – until one day something abruptly changes and she gets caught in the grips of a terrifying panic attack, an attack so severe that she loses consciousness. When she wakes up, everything is different and she finds herself suddenly terrified of doing all of the things she used to do.  When we first meet Norah, she is basically housebound.  She no longer attends school, instead doing her coursework online, and the only time she ever leaves the house anymore is to attend weekly therapy sessions, which are emotionally exhausting for her, not so much because of the therapy itself, but more so because of the stress having to leave the safety of her home causes her.  Because she has stopped leaving her home, she and her friends gradually drift apart and, by the time we meet Norah, her main social interactions are now with her mom and her therapist.  That is, until Luke moves in next door.  When he spots Norah peeking at him from her bedroom window, he decides to come over and introduce himself.

After a few awkward false starts, such as when Luke catches Norah “fishing” for her groceries out the front door with a long-handled broom because she’s too afraid to step out and retrieve them, Luke and Norah do finally meet and become friends.  At first Norah tries to hide all of the details of her mental illness from Luke for fear of how he will react, but Luke is pretty perceptive and picks up on it anyway.  She still withholds the extent of it, but does start to try to explain what she is going through.  As their friendship slowly develops into something more, Norah struggles with the idea that she really is not worthy of Luke because she may never be able to do “normal” boyfriend/girlfriend activities with him and believes that he deserves much more than she has to offer him.  This creates even more turmoil to Norah’s life as she must decide what she is going to do about Luke – let him in or let him go…

Norah – I really adored Norah.  She’s smart and funny, incredibly resourceful when it comes to coping with her illness, and she’s also much braver than she gives herself credit for being.  I found Norah so likeable that I immediately wanted to know more about her condition since agoraphobia is something that I know next to nothing about.  Being in Norah’s head as she struggles through each day made the story especially powerful and gave me a much clearer picture of the illness and how truly crippling it can be.  Norah’s frustration is palpable throughout, especially the fact that she is very much aware that most of her fears were irrational, but still can’t stop their paralyzing effects.  By allowing us access to Norah’s thoughts, Gornall paints an authentic and vivid portrait of agoraphobia and allows us to see beneath the surface of what is often considered an “invisible” illness.

Luke – Luke is just as adorable as Norah is and I especially loved how determined he was to befriend Norah in the beginning of the story, no matter how much she tried to avoid him.  I don’t know that I completely bought into the idea of Luke and Norah as a romantic couple, but I was 100% into their friendship.  I liked that he really wanted to know more about Norah’s condition – not to judge her as Norah had initially feared – but so that he could interact with her in ways that would be most comfortable to her.

Romance is not a “cure” – Even though I didn’t completely buy into the romantic aspect of the story, I did really like how Gornall keeps it real.  Just as it wouldn’t happen in real life, having a boyfriend does not magically cure Norah.  Granted, she does have more of a support system now that she has Luke in her corner in addition to her mom and therapist, but the illness is clearly still there throughout the book.

Humor – Even though Norah’s struggles with mental illness are quite serious, I loved that the author was still able to incorporate some light and humorous moments into the story.  Norah occasionally finds herself in awkward situations, such as when she is shooing an obnoxious bird away from her window one day and new neighbor Luke sees her and thinks she is flirting with him.  As embarrassing as it was for Norah at the time, I liked that later in the book, as Norah gets more comfortable with Luke, she’s able to laugh that moment off and explain to Luke that she wasn’t flirting with him – It was that the bird was messing with her OCD.  Not that OCD is funny by any stretch of the imagination, but I did like that Norah was able to find humor and laugh at herself a bit rather than be humiliated about what happened.

I can’t really say that there’s anything I disliked about Under Rose-Tainted Skies, although I would have  liked a little more for the ending, mainly because I felt it wrapped up a little too quickly.  I think that’s mainly because I had become so invested in Norah that I just didn’t want her story to end.  I wanted to follow her longer and see how she was doing.

Norah’s story is one that needs to be told and Louise Grovall does a beautiful job in telling it.  If you’re looking for a raw and honest look at the life of someone who is coping with agoraphobia and OCD, you should definitely check out Under Rose-Tainted Skies.

There is mention of self-harm and Norah’s therapist talks to her at length about it. 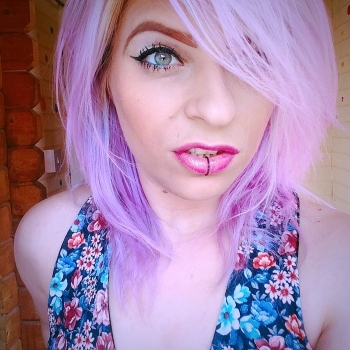