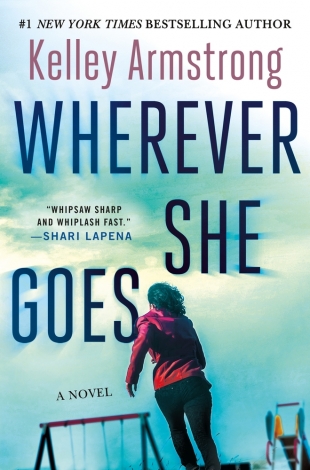 Wherever She Goes by Kelley Armstrong

WHEREVER SHE GOES Review

Kelley Armstrong’s newest book Wherever She Goes is a gripping psychological thriller that explores the lengths one woman will go to when she believes the police aren’t doing their jobs.

Single mom Aubrey Finch is in the neighborhood park one day and meets a young woman and her little boy.  After some brief small talk, they go their separate ways, but the next time, Aubrey is in the park, she sees the same little boy being pulled unwillingly in an SUV which then speeds away.  There’s no sign of his mother anywhere, so panicked and concerned for the boy’s safety, Aubrey phones the police.  When they arrive on the scene, the reaction Aubrey gets is not at all what she is expecting.  Because there’s no parent around reporting that their child has been abducted, the police refuse to believe Aubrey’s story and even go so far as to accuse her of being a mentally unstable attention seeker.  Aubrey knows what she saw, and so, frustrated by law enforcement’s lack of action, she decides to take matters into her own hands to bring the little boy home safely…

Wow, what a wild ride this was.  I had tremendous sympathy for Aubrey for so many reasons.  I can’t even imagine trying to report something as important as a child abduction to the police and having them blow me off.  I also honestly can’t imagine law enforcement behaving so irresponsibly, but it definitely serves as an effective device to move the story along and spur Aubrey into amateur sleuth mode.  Even more so than the way she was treated by the police, however, my sympathy for Aubrey lies in the fact that she is newly divorced and trying to make it on her own without help from anyone.  Her own child is living with her ex-husband full time now (Aubrey’s idea) because she’s living in a not-so-great neighborhood where the rent is cheap in hopes of saving up money for a better home that is more suitable for a child.  I commend her for her independence in this matter but also felt bad for her because not having custody of her child immediately opens her up to all kinds of judgment from strangers.  Everyone assumes she has done something terrible to not have her child living with her.

Aubrey also has her fair share of secrets that she has been hiding for years.  I’ll admit that the fact she’s hiding something about herself, coupled with the way people kept questioning her sanity did give me pause as to whether or not Aubrey was a reliable narrator.  I liked her so much though that I wanted her to be right so I was glued to the book to see what, if anything, she would find when she started looking for proof that there really was an abduction.  The author does a fantastic job building up suspense here because when Aubrey starts trying to locate the woman she met in the park that day, she opens up a can of worms that is way more than she bargained for.

My only real complaint about Wherever She Goes is that I actually felt more invested in Aubrey’s personal dramas and in finding out about her past than I did in the abduction storyline.  Both were interesting, of course, but the witnessing of a crime and having no one believe your story just felt a little stale to me, like it has been done many times before (The Girl on the Train and The Woman in the Window immediately come to mind).  Aubrey’s personal story grabbed my attention and held it more since it was the more unique of the two.

Even with that one little quibble though, Wherever She Goes is still a very entertaining read.  There were plenty of plot twists to keep me guessing and I found the ending to be very satisfying.  I’d recommend this book to anyone who enjoys psychological thrillers and domestic dramas.

From New York Times bestselling author Kelley Armstrong comes a brand new psychological thriller about the lengths one woman will go to in order to save a child.

“Few crimes are reported as quickly as a snatched kid.”

Instead, people question her sanity. Aubrey hears the whispers. She’s a former stay-at-home mom who doesn’t have primary custody of her daughter, so there must be something wrong with her, right? Others may not understand her decision to walk away from her safe life at home, but years of hiding her past – even from the people she loves – were taking their toll, and Aubrey knows she can’t be the mother or wife she envisions until she learns to leave her secrets behind.

When the police refuse to believe her, she realizes that rescuing the boy is up to her alone. But after all the secrets, how far is she willing to go? Even to protect a child.