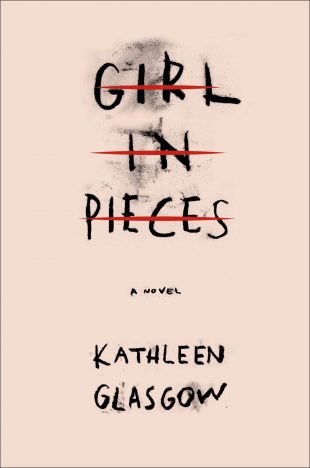 Girl in Pieces by Kathleen Glasgow

Charlotte Davis is in pieces. At seventeen she’s already lost more than most people lose in a lifetime. But she’s learned how to forget. The broken glass washes away the sorrow until there is nothing but calm. You don’t have to think about your father and the river. Your best friend, who is gone forever.  Or your mother, who has nothing left to give you.

Every new scar hardens Charlie’s heart just a little more, yet it still hurts so much. It hurts enough to not care anymore, which is sometimes what has to happen before you can find your way back from the edge.

My Review of Girl in Pieces:

Girl in Pieces is one of those books that I literally could not put down once I got started. Kathleen Glasgow shows us a raw and unflinching look inside the world of those who self-harm.  Girl in Pieces centers around Charlotte Davis (or Charlie as she is known).  Charlie has been through more in her short seventeen years than most of us go through our entire lives. Both her dad and her best friend have died, she has ended up homeless for a year, been exposed to drugs, alcohol, and witnessed sexual abuse while living in what was basically a sex house, and that merely scratches the surface of all that she has experienced.  Reaching the breaking point and attempting to end her life lands Charlie in a hospital where she finally gets much needed help and begins her road to recovery.  Most of the novel focuses on Charlie’s journey to recovery and all of its ups and downs.

What Did I Love?

Charlie is an immensely likeable character that I think most everyone will relate to.  Either she’ll remind them of themselves or of someone they know.  Because she’s so familiar and so relatable, her journey is all the more real and all the more shocking because it makes you realize that anyone around you at any time could be going through a similarly rough time, fighting inner demons that you can only begin to imagine.

What I really liked about Charlie was her determination.  She gets off the bus in Arizona and immediately sets out to make her way in the world, taking things one step at a time, one day at a time.  Sometimes it takes everything in her to fight the fear of being alone so that she can function, but she does it. She secures a job at a coffee shop, finds herself a low budget room to rent, and slowly but surely begins to build a life for herself.  Now that’s not to say everything is sunshine and roses for Charlie just because she has a job and a place to life.  There are still plenty of ups and downs, especially once Charlie begins a relationship with a coworker named Riley, who has a drug problem and whose behavior is becoming increasingly erratic the longer Charlie knows him.  Because Riley is so caught up with his own issues, he’s not exactly the ideal support system for Charlie and her dependence on someone who cannot be relied on leads to some occasional dark moments for her.

But as I said, Charlie has a lot of determination to make it through the darkness.  She is not just a girl in pieces, as the title indicates, broken by all that has happened to her. She’s also a girl who is seeking to discover all of the pieces that make her who she is, both the good and the bad, so that she can fit them all together and better understand who she is so that she can make peace with it and move forward.  Charlie is an artist and ultimately it is through her drawings that she finally begins to find her sense of self and to feel more whole.

Perhaps its most important messages are for those who self harm.  Girl in Pieces lets those who self-harm know they aren’t alone – that others are going through what they’re going through.  We see it first in the hospital where Charlie encounters many other girls like her and then throughout the book, Charlie meets a few other people she would never have guessed were self-harmers until she sees their scars and realizes that it’s not just her.  Girl in Pieces also conveys the message that there are also people out there who care and who want to try to help.  Even though Charlie’s mother is no help at all, Charlie has many friends, both old and new, who genuinely care about her and want to see her succeed.

Girl in Pieces also shows that the path to recovery is a long and sometimes never-ending journey and that it will have ups and downs.  When Charlie relocates to Arizona, finds herself a job and a place to live, for example, she still brings along the kit that she uses to cut herself with, just in case she needs it.

Even if you’re doing great one moment, something could happen that triggers a relapse.  The message of the book is to realize that setbacks are normal and that they are just that – setback.  They are not failures, and they do not define you and no matter how many setbacks you have, you should never lose hope of someday reaching a point where you no longer feel the need to engage in self-harming behavior or to keep that cutting kit with you – just in case.

At first, I had Charlie’s relationship with Riley in the “Don’t Like” category.  Riley is a former musician who is very charming and charismatic, but whose life is in just as bad a place as Charlie’s is.  Because of that, their relationship is pretty toxic and I constantly wanted to scream at Charlie to just get away from him.  Ultimately, however, I came to terms with the fact that toxic relationships are quite likely to occur when someone is on the path to recovery.  Looking at it from that perspective, I think Charlie’s experiences with Riley therefore only further add to the authenticity of Glasgow’s story.  While Riley himself may initially be considered somewhat of a negative, he ultimately ends up being a very important part of Charlie’s journey and so I’m going to pull him out of the “Don’t Like” category and let’s just leave it at “It’s complicated.”

Who Would I Recommend Girl in Pieces to?

Honestly, I think Girl in Pieces is one of those books that everyone should read.  It’s raw, honest, brave, haunting, and without a doubt, one of the most powerful books I’ve read this year.  I would temper my recommendation just to say that I’m sure some of the topics covered would be considered triggers to those who self-harm, so they’d have to determine for themselves if the book is a good fit for them. 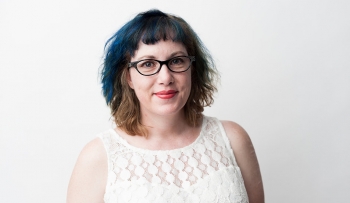