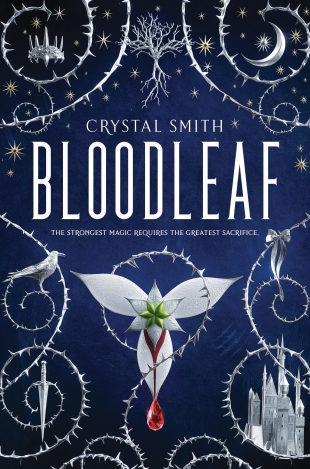 Bloodleaf is the first book in an exciting and imaginative new fantasy series of the same name by Crystal Smith. It is Smith’s debut, and with it, she has put her own creative spin on the Grimm fairy tale, “The Goose Girl.”

Bloodleaf follows Aurelia, who is the Princess of Renalt, and who is engaged to marry the Prince of Achleva, a young man she has never actually met. Their marriage is designed to serve a political agenda, to unite these two countries and ensure peace across the land.

In addition to being a Princess, however, Aurelia is also a witch who has been hiding her powers from everyone, especially the Tribunal, the ruling body in Renalt, for years. The Tribunal loathes magic and looks for every opportunity to execute a witch. The only way Aurelia can hope to escape the persecution her fellow witches face is to keep her magic hidden at all costs, something that isn’t always easy to do since Aurelia doesn’t really know how to control it yet.

While she is traveling to Achleva to meet her soon-to-be husband, there is an attempted assassination, which exposes Aurelia’s secret. Betrayed by those around her, Aurelia flees her country while an imposter continues on to Achleva to take her place. Unable to return home because everyone now knows she’s a witch and unable to move forward and marry the Prince because of the imposter, Aurelia must forge a new way for herself in the world.

She takes on a new identity, makes new friends, and works to hone her magical abilities. One of her abilities is that she can see and sometimes communicate with spirits, and it is this ability that lands Aurelia right in the middle of a sinister plot to destroy an enchanted wall that protects Achleva. An evil mage is determined to bring the wall down and is leaving a trail of bodies in his wake as he does everything he possibly can to break the spell that is keeping the wall intact.

Can Aurelia perfect her magical abilities in time to stop the deadly mage before even more lives are lost?

Bloodleaf hooked me pretty quickly because it starts on out such a dark and dangerous note, with a public execution. Renalt and the Tribunal definitely gave me Salem Witch Trial vibes with their relentless persecution and rush to judgement of anyone they believed to be a witch.

It also of course made me sympathetic to Aurelia since apparently not even her royal title could prevent her from the possibility of execution were she discovered to be a witch. What really impressed me about Aurelia though was how she rallied after being betrayed and took charge of her own destiny. She didn’t wait around like a damsel in distress, hoping to be saved.

I also liked that Aurelia isn’t flawless by any means. She makes some questionable choices along the way and sometimes makes things harder for herself because of those choices. But she is constantly learning from her mistakes and growing into a very admirable young woman, one who would make a wonderful leader if given the chance. As much as I enjoyed the action of the story, I think Aurelia’s inner journey was equally captivating for me.

In addition to Aurelia, Bloodleaf also features a fantastic cast of supporting characters. They’re not nearly as fleshed out as Aurelia, but I still really enjoyed them all anyway, especially Zan, Nathaniel, and Kate, who become unexpected allies for Aurelia after she is forced to flee everything she has ever known.

I also thought the author wrote a brilliant villain in Toris. I don’t want to give any spoilers away about him, but man, I really loved to hate that guy.

The mythology and the supernatural elements were also very well done and just added so much to the story. Between the spirits that only Aurelia could see and communicate with and their sometimes ominous messages and the almost mystical Stonehenge like vibe that I got every time Aurelia went to the enchanted wall, the book just had such an atmospheric quality.

Overall, I really enjoyed Bloodleaf but I did have a couple of minor issues with it. The first one was that the pacing was a little uneven and dragged just a little at times in the first half. It never bothered me enough that I would have considered quitting the book, but there was just a noticeable lull for me.

I also would have liked a little more memorable worldbuilding when it came specifically to Renalt and Achleva. I didn’t really feel like I came away with a distinct picture of what either of them really looked like.

Even with those couple of minor issues, however, I still thought Bloodleaf was a unique and compelling start to Smith’s debut fantasy series and I look forward to seeing where she takes the story next. I’d recommend it to anyone who enjoys reading fantasy and/or retellings, and also to anyone who enjoys the idea of a fierce princess who is no damsel in distress.

Perfect for fans of RED QUEEN and UPROOTED, Crystal Smith’s debut novel, BLOODLEAF, is an imaginative retelling of the Grimm Fairy tale “The Goose Girl” that takes a ghostly mystery and sets it inside an epic fantasy world.

Princess Aurelia is a prisoner to her crown and the heir that nobody wants. Surrounded by spirits and banned from using her blood-magic, Aurelia flees her country after a devastating assassination attempt. To escape her fate, Aurelia disguises herself as a commoner in a new land and discovers a happiness her crown has never allowed. As she forges new bonds and perfects her magic, she begins to fall for a man who is forbidden to rule beside her. But the ghosts that haunt Aurelia refuse to abandon her, and she finds herself succumbing to their call as they expose a nefarious plot that only she can defeat. Will she be forced to choose between the weight of the crown and the freedom of her new life? 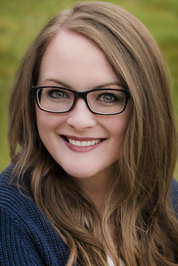