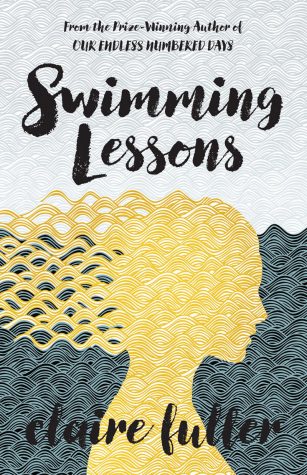 
Goodreads Synopsis:  Ingrid Coleman writes letters to her husband, Gil, about the truth of their marriage, but instead of giving them to him, she hides them in the thousands of books he has collected over the years. When Ingrid has written her final letter she disappears from a Dorset beach, leaving behind her beautiful but dilapidated house by the sea, her husband, and her two daughters, Flora and Nan.

Twelve years later, Gil thinks he sees Ingrid from a bookshop window, but he’s getting older and this unlikely sighting is chalked up to senility. Flora, who has never believed her mother drowned, returns home to care for her father and to try to finally discover what happened to Ingrid. But what Flora doesn’t realize is that the answers to her questions are hidden in the books that surround her. Scandalous and whip-smart, Swimming Lessons holds the Coleman family up to the light, exposing the mysterious truths of a passionate and troubled marriage.

I wasn’t entirely sure what to expect when I picked up Claire Fuller’s Swimming Lessons, but wow, what an incredibly beautiful and engaging read it was for me.  In fact, I think it’s my first 5 star read of 2017. What I loved about Swimming Lessons was that while it contains a great deal of suspense, it was not at all what I would classify as a typical thriller.  Instead of nonstop, heart-pounding action, this story was a quiet exploration of a troubled marriage and its impact on an entire family.

When the novel opens, Gil Coleman has suffered an accident.  When his two daughters, Flora and Nan, hear of his accident, they rush home to be by their father’s side but are distraught when they hear him say that he hurt himself while following their mother, Ingrid.  Why?  Because Ingrid Coleman was presumed dead in a drowning accident twelve years earlier. The fact that Ingrid’s body was never found has always haunted the family.  Was there any way she could have survived, but if so, why would she then have disappeared for twelve years?  Nan chooses to believe that her mother is dead so that she can move on with her life and chalks her father’s story up to the delusions of an elderly man, but Flora and of course Gil, still seem to hold on to a sliver of hope that Ingrid may be out there somewhere.  At one point, Flora even swears that she sees her mother and starts trying to follow her across town.  The discrepancy in how the family members feel regarding Ingrid’s disappearance introduces a thread that runs throughout the novel – is it better to know the truth even if it’s not the truth we wanted or is it better to keep hope alive even if it means we may spend our entire lives hoping for something that may never happen?

One of the elements of Swimming Lessons that I really loved is that the story is revealed to us in two parts, through alternating chapters – we see the present from the viewpoint of Flora, but then we are also given a rich portrait of the past from the viewpoint of Ingrid.  How? Because unbeknownst to Flora and Nan, and perhaps even to Gil, Ingrid has written a series of letters and hidden them in books strategically around the Coleman house.  In these letters, she lays out for Gil the way she viewed their lives together – from the moment they first met when Ingrid was a student in one of Gil’s writing classes in college through all the years of their marriage leading up to the moment when Ingrid presumably drowned.  Honestly, Ingrid’s letters are the backbone of this story. They add layer upon layer of rich detail and history that, especially with regard to Gil, are often quite different from the present-day version of Gil that we see through Flora’s eyes.  What Ingrid’s letters give us is the portrait of a young woman who wants to be a writer but then gets so caught up in an affair with her charming college professor that she ends up not graduating from college, getting pregnant instead, and settling into what eventually becomes a very troubled marriage.  Gil wants her to be a baby-making machine and little more than that and she resents it.  Since he won’t listen to her, Ingrid resorts to writing these letters to him in hopes that he’ll find them someday in his precious books which fill nearly every room of their house.  What we see as we get to read the letters is that their relationship becomes so stifling to her over the years, it becomes easier and easier for the reader to wonder if perhaps there is any truth to the idea that she may still be out there somewhere.  Could she have faked her death so that she could have a fresh start somewhere else?  Or are we just getting caught up in the same line of wishful thinking that Flora and Gil are in?

Another thread that runs through Swimming Lessons that I loved was the idea that readers bring their own meaning and interpretations to a book.  One of Gil’s favorite pasttimes is to collect books and study the marginalia (i.e. what readers have written or doodled in the margins, what they’ve left behind, while they’re reading).  He believes that those little pieces of themselves that readers leave behind are what give insight into the character of the book and add meaning to the book itself.  It therefore makes it all the more meaningful that Ingrid has chosen to leave behind these little pieces of herself in so many of his books.  I loved the idea that she had left clues right under his nose for years and that if he were to find them all and follow the evidence, he might have a definitive answer as to what happened to her or at least a definitive why anyway.

I think my absolute favorite aspect of this novel was the author’s writing style.  Fuller’s writing is just so elegant and simple – the story felt very organic as it unfolded.  It wasn’t this huge melodramatic event, more just the quiet reveal of a troubled family.

The only dislike I had in this book was Gil himself.  At first I was somewhat indifferent to him or maybe even felt a little bad for him that he was imagining seeing his dead wife. But then once I started reading Ingrid’s letter, I felt a strong dislike for pretty much everything about him.  As much as I disliked him though, I still very much appreciated the rich character portrait we were given of him so hats off to the author for doing such an incredible job portraying him, his warts and all.

Swimming Lessons was a powerful read for me, not just because of the ‘Is she really dead or could she possibly be alive?’ mystery that runs through the novel, but also because it embraces those threads that are woven through it and leaves the reader to interpret what really happened to Ingrid.  We all bring our own meanings to the books we read, and as Gil says, no two of us read the exact same book.  Want to find out what really happened to Ingrid?  Read Swimming Lessons yourself and find your own meaning. 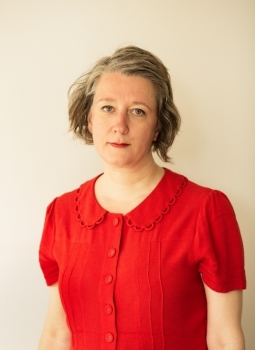