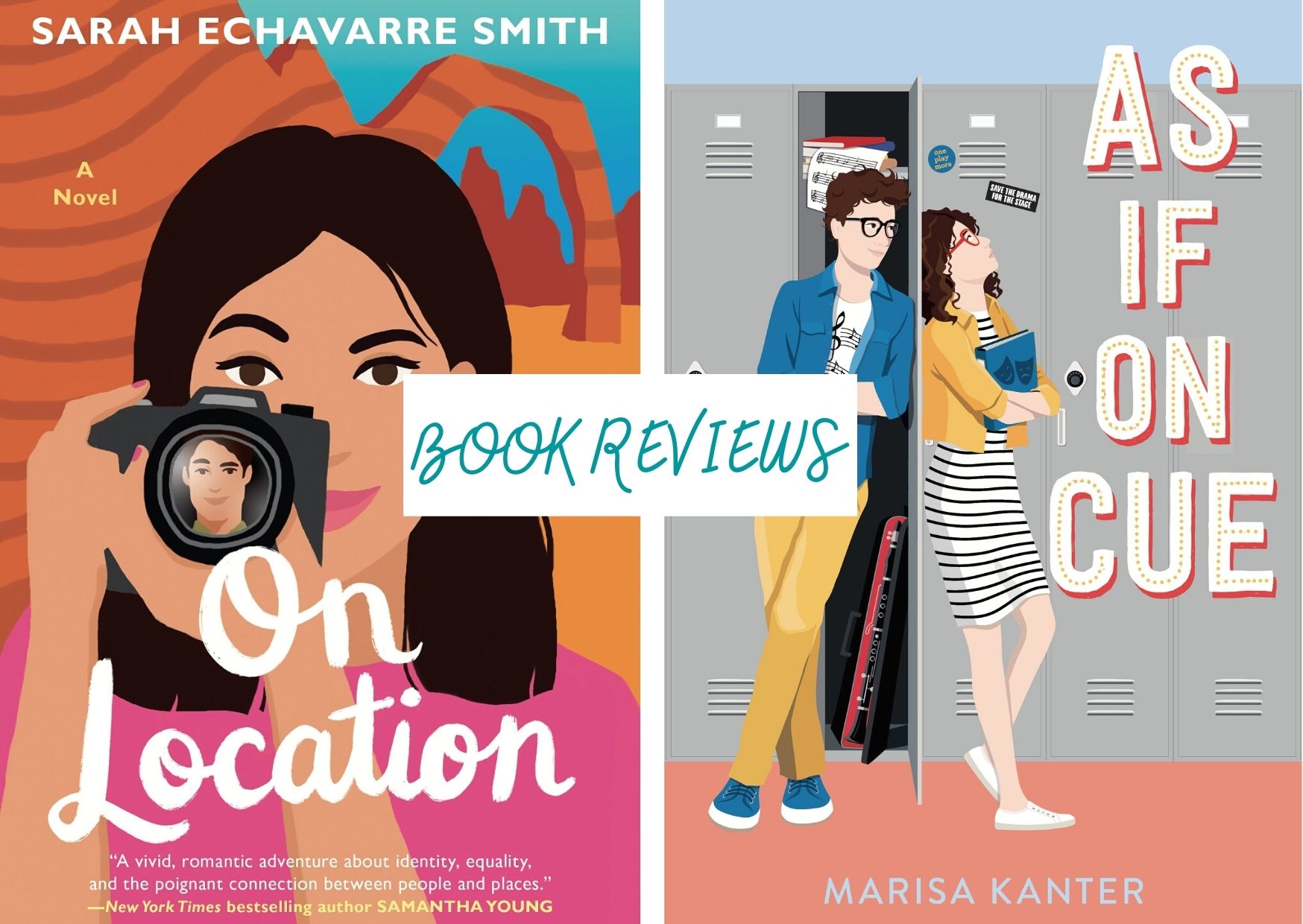 Hey everyone, I hope your Monday is off to a good start.  I’m back today with a couple more fun romances to share with you.  Normally by this time, I would have already switched over to spooky season reads, but I seem to still be in full-on romance mode these days, although I do have a couple of fantasy reviews coming up later in the week. Anyway, I’m excited to share my thoughts on these books, which have two things in common – the enemies-to-lovers trope and a focus on Arts and Entertainment.

Sarah Smith’s new contemporary romance On Location checked a lot of boxes for me.  As someone who loves books that feed my wanderlust, I loved that it’s centered around a travel documentary that highlights iconic national parks in Utah.  I’m also a sucker for a protagonist who is an underdog, so I was excited that the main character was a young woman trying to succeed in a male-dominated industry surrounded by mansplainers.  And last but not least, On Location also features an enemies-to-lovers romance, which is one of my favorite romance tropes.  Needless to say, I couldn’t wait to dive into this story and fell head over heels for it from the very first scene, an adorable meet cute that takes place in the most unlikely of places, the NYC subway.

On Location follows Alia Dunn, a young woman who has just scored the chance of a lifetime, the opportunity to produce her very own travel series at the TV network where she has worked for years.  It’s everything Alia has ever dreamed of career-wise, plus it has the added bonus of being set in the national parks of Utah, which Alia has a very personal connection to from her childhood. There are just two catches:  1) the network executives (all men of course) insist on selecting the show host, and their choice, a D-list celebrity supposedly trying to rehab his image, is questionable at best, and 2) the newest member of her production crew turns out to be Drew Irons, the sexy guy Alia met on the subway a couple of weeks ago.  This wouldn’t be a problem except that after their meet cute and what Alia thought was a lovely first date, Drew then ghosted her.  Awkward much?

I really liked Alia and admired her determination.  As awkward as her situation is, she isn’t about to let a D-list celebrity who behaves like a diva and a guy who ghosted her ruin her vision for this series.  She is feisty and resilient and doesn’t hesitate to put these guys in their places if the situation warrants it.  I had mixed feelings about Drew at first because, like Alia, I was skeptical about his excuse for why he disappeared after their date.  I was also not a big fan of him stepping in to pacify the D-list Diva instead of letting Alia handle things herself.  It came across as very sexist and I cheered for Alia every time she confronted Drew about overstepping, and I also applauded Drew because he seemed to really listen to her and try to learn from his mistakes.  That growth won me over, especially since it was also very clear that he and Alia had major chemistry so I was really rooting for them to figure out if they could move forward as a couple.

Aside from Alia and Drew’s evolving relationship, I was also a big fan of the actual process of putting together a travel series.  I never would have thought I’d find that interesting, but the author does a wonderful job of showing all of the hard work that goes on behind-the-scenes, while at the same time, keeping it an entertaining read.  Another highlight for me were a couple of younger secondary characters who had a major case of puppy love for one another.  So adorable.

On Location is a fun and sexy read that is sure to please romance fans.  4 STARS

As If on Cue Goodreads

Marisa Kanter’s new YA novel As If on Cue is a cute and fun enemies-to-lovers romance that follows Natalie and Reid, two teens who have been rivals for most of their lives.  Their heated rivalry started with the clarinet, where they each vied to be First Chair and tried to sabotage each other’s chances, thus beginning the prank wars.  The prank war between Natalie and Reid have become so intense over the years that they have actually drafted rules for them that must be followed.  Natalie eventually stopped playing and found her passion elsewhere, in theater and in writing plays, and yet the prank wars continued on.

When she learns that the budget for the arts has been decimated and that band is the only arts class that will be funded, Natalie devises a plan of attack to save the arts, one that uses a play she has written and that will bring together students from all of the other arts programs.  Her plan, which potentially pits her yet again against Reid, but also against her dad, who is the high school band teacher, backfires spectacularly due to a prank gone wrong, and as punishment, Natalie and Reid are forced to work together to bring Natalie’s play to life, basically their worst nightmare come true.

As If on Cue has a lot of hilarious moments in it as Natalie and Reid have to figure out how to work as a team when all they’ve ever done is try to outdo one another.  While the pranks themselves are pretty juvenile and annoying to their friends, there’s also an interesting undertone though where the author introduces a dual timeline, with flashbacks that show how the prank wars originated and that really showcases the complex feelings Natalie and Reid have for one another. I really appreciated this because it gave more context to some of Natalie’s actions in the book, which were downright bratty at times.  It becomes pretty clear that perhaps Natalie and Reid don’t hate each other as much as they thought they did and I enjoyed seeing how their prankish relationship originated as well as how it evolved once they finally started working together and appreciating one another.  I always love a story where characters show personal growth and there was a lot of that with Natalie as the story progressed.

The Arts getting cut is also such a relevant and timely topic because it happens frequently.  I loved that the author really spotlighted how truly important the arts are and I really enjoyed watching the students come together to try to save them.  I especially loved the behind-the-scenes action and seeing everything that takes place, from the writing process all the way through to the performance itself. I actually enjoyed this aspect of the story just as much as, if not more so, than the romantic angle.

If prank wars, a student-written retelling of Disney’s Frozen called Melted, and a fierce student-driven campaign to try to keep the Arts from being cut from their high school’s budget sounds like your thing, you’ll definitely want to check out As If on Cue.  4 STARS