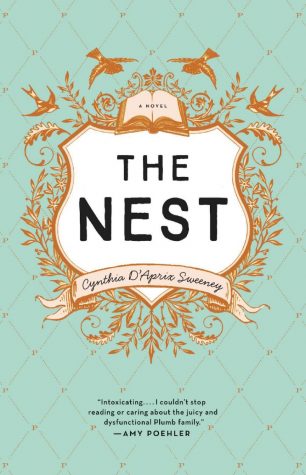 The Nest by Cynthia D'Aprix Sweeney

Synopsis from Goodreads: A warm, funny and acutely perceptive debut novel about four adult siblings and the fate of the shared inheritance that has shaped their choices and their lives.

Every family has its problems. But even among the most troubled, the Plumb family stands out as spectacularly dysfunctional. Years of simmering tensions finally reach a breaking point on an unseasonably cold afternoon in New York City as Melody, Beatrice, and Jack Plumb gather to confront their charismatic and reckless older brother, Leo, freshly released from rehab. Months earlier, an inebriated Leo got behind the wheel of a car with a nineteen-year-old waitress as his passenger. The ensuing accident has endangered the Plumbs joint trust fund, “The Nest,” which they are months away from finally receiving. Meant by their deceased father to be a modest mid-life supplement, the Plumb siblings have watched The Nest’s value soar along with the stock market and have been counting on the money to solve a number of self-inflicted problems.

Melody, a wife and mother in an upscale suburb, has an unwieldy mortgage and looming college tuition for her twin teenage daughters. Jack, an antiques dealer, has secretly borrowed against the beach cottage he shares with his husband, Walker, to keep his store open. And Bea, a once-promising short-story writer, just can’t seem to finish her overdue novel. Can Leo rescue his siblings and, by extension, the people they love? Or will everyone need to reimagine the future they’ve envisioned? Brought together as never before, Leo, Melody, Jack, and Beatrice must grapple with old resentments, present-day truths, and the significant emotional and financial toll of the accident, as well as finally acknowledge the choices they have made in their own lives.
This is a story about the power of family, the possibilities of friendship, the ways we depend upon one another and the ways we let one another down. In this tender, entertaining, and deftly written debut, Sweeney brings a remarkable cast of characters to life to illuminate what money does to relationships, what happens to our ambitions over the course of time, and the fraught yet unbreakable ties we share with those we love.

Cynthia D’Aprix Sweeney’s debut novel The Nest is, by far, one of the most talked about books of 2016 so far.  In fact, I’m pretty sure it has appeared on nearly every ‘Must-Read’ list I’ve read in recent months.  I was eager to see what all the hype was about so I purchased a copy and dove in.

Sweeney hooked me instantly in the prologue with her dramatic and suspenseful description of a tragic accident that sets the rest of the events of the novel into motion.  While attending a family party, Leo Plumb, inebriated and high on cocaine, persuades a young lady named Matilda, who is working at the event, to take a ride in his Porsche. The ride, and the prologue, end abruptly when Leo loses control and crashes his car during an ill-timed sexual encounter.

The central storyline of The Nest deals with the fallout from this accident. Although both Leo and Matilda survive the crash, Matilda is left with a permanent disability that, of course, Leo is responsible for because of his reckless actions.  And yet, ironically, what has the Plumb family, particularly Leo’s three siblings, Melody, Jack, and Beatrice, distraught when the novel opens, is not what has happened to Matilda because of Leo, or even how could have possibly wrecked his own life.  No, what has them all  upset is that their mother has dipped into what they refer to as ‘The Nest’ to pay off Matilda and otherwise clean up Leo’s mess.

So why all the fuss about the so-called ‘Nest’?  The Nest is the Plumb siblings’ trust fund.  It was set up for them by their father years ago and was meant to be divided equally between the four of them when the youngest sibling turned 40.  Their father had intended that the Nest would simply be a modest sum to pad whatever fortunes his children should have already amassed for themselves by the time they had all reached middle age.  Because of some shrewd investing by the family attorney, however, the Nest had grown considerably in size and had promised a huge payout for each of the Plumbs — at least until their mother decided to raid it to help Leo get out of his scrape.

What we learn immediately about the Plumb siblings is that they have each been financially irresponsible over the years and so have grown to depend on the disbursement of ‘The Nest’ to bail them out of their financial difficulties.  Melody, the youngest Plumb sibling, is a homemaker who is stubbornly clinging to an upscale lifestyle that her family really can’t afford to maintain anymore.  She can barely manage to pay her mortgage but yet is still determined to send her twin high school age daughters to expensive private colleges.   Older brother Jack, an antiques dealer, is not faring any better.  He has gotten in over his head and is keeping his store afloat with a line of credit he has taken out against the beach house that he and his husband Walker own.  Walker, however, is unaware of the line of credit and so Jack has been living a life of secrets and lies in hopes that his share of the Nest would allow him to pay off the credit line so that Walker would never know what Jack had done behind his back.   Beatrice (Bea), the elder Plumb sister, is a talented writer whose career started out with a lot of promise but has since completely stalled out.  She is supposed to be writing a novel and has been living primarily off of the advance for her book, but after nearly a decade with no signs of a forthcoming novel, Bea’s literary agent is threatening to drop her.  When their mother and Leo burst their bubble that the Nest is going to save them, the Plumb siblings all panic and begin scrambling around trying to figure out how they’re going to hold their lives together if they can’t force Leo to pay them back their share of the Nest.  The irony here is that Leo apparently has been secretly squirreling away money for years in an offshore account and probably has enough to have pay off Matilda by himself in the first place, but most definitely has enough to repay the funds that were taken from the ‘Nest.’  Leo, however, doesn’t want to lose his own little nest egg, so he evades his family when they ask him how he’s going to pay them back and begins scheming to raise money to repay his debt.  Sweeney uses the Plumbs and their lost ‘Nest’ to very effectively satirize the elite and the money/status-obsessed.  How will the Plumbs ever survive if they have to live like the rest of us lowly non-trust fund babies?

Strengths of The Nest:

Character driven.  While the story in itself is a great one, what really drives The Nest are the characters and the ultra-realistic way in which Sweeney draws them.  They are the textbook definition of a dysfunctional family and I’ll admit that initially I had some trouble relating to them because of their obsession with how not getting the Nest has ruined their lives.  I wanted to yell at Melody for being so horrified that her children may have to attend public colleges instead of private ones and at Jack because OMG! He might have to sell his beach house without the Nest.  The more I read, however, the more I was able to get past the entitled, elitist exteriors and see how flawed and utterly human Sweeney has painted them.  I even started to see myself and my own family in the Plumbs and thus could more easily identify with their struggles and with their frustrations with each other and especially with Leo.  Nothing is more frustrating than having a loved one who is his or her own worst enemy.